Islamic history is filled with genius architects. Some of the greatest monuments on earth are the product of Muslims who wanted to build beautiful structures that would show the greatness of Islam throughout time. The Dome of the Rock in Jerusalem, the Taj Mahal in Agra, India, the Alhambra in Granada, Spain, and the Blue Mosque in Istanbul, Turkey are all examples of this cherished and beautiful architectural tradition.

Arguably the greatest and most influential architect of all time, however, was the Ottoman architectural master, Mimar Sinan, who lived from 1489 to 1588. He lived during the zenith of the Ottoman Empire, during the reigns of sultans Selim I, Suleyman, Selim II, and Murad III. During this time, the iconic skyline of Istanbul was changed forever, with the beautiful additions of great sultans via Mimar Sinan.

Mimar was the son of a Greek or Armenian convert to Islam, Abd al-Mannan. He joined the elite corps of the Ottoman army, the Janissaries as a young man, like his father did before him. In the Janissaries, Sinan showed early talent as an engineer. He rose up through the ranks, becoming an officer in the army who participated in numerous military campaigns under sultans Selim and Suleyman. As the Ottoman armies marched to new extents in Europe, Africa, and Persia, Sinan went with them, organizing engineering corps for the military, as well as building mosques and other civil buildings in newly Ottoman cities. In 1538, his talents could no longer be ignored and he was given a position as the head architect of the sultan’s government in Istanbul. 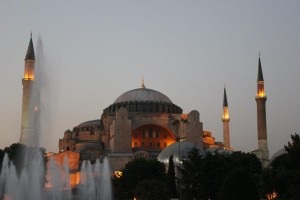 The Hagia Sophia was the inspiration for Ottoman mosques

The timeless gem of Istanbul’s architecture has always been the Hagia Sophia. It was built as a Christian church in 537 by the Byzantines and was converted to a mosque to serve the new Muslim population after Mehmed II’s conquest of the city in 1453. Since then, Ottoman architects had used the Hagia Sophia’s giant dome as a template for how to design Muslim mosques. Ottoman mosques were thus based on a premise of having one giant central dome over the main prayer hall that was held up by numerous semi-domes on its sides. This greatly increasing the mosque’s size and capacity. Despite the numerous attempts through the decades to top the Hagia Sophia in size and beauty, no architect was able to accomplish such a feat. Mimar Sinan made it his goal to build a monument to Islam that was more magnificent than the epic Hagia Sophia.

Sinan certainly had a lot of practice in designing buildings. As he began his career, he built smaller mosques across the empire. He built the Khusruwiyah Mosque in Aleppo, Syria in 1547, which remains today as a landmark in that city. He also renovated the mosque of Imam Abu Hanifa in Baghdad, and the mosque of Jalal al-Din al-Rumi in Konya. These projects all gave Sinan a good background in architecture and engineering, and they also provided him with the skills he would need once he started building larger monuments to the glory of Islam.

In 1543, one of Sultan Suleyman’s sons, Prince Mehmed, died of smallpox at the age of 21. Suleyman insisted on building a large mosque in his honor that would serve the local community in Istanbul. This was the first opportunity Sinan had to build a large, monumental mosque. Over the next four years, Sinan worked on what would be called the Şehzade Jami’ (the Prince’s Mosque) in central Istanbul. When it was completed, it became a major landmark of the city as well as one of its main mosques. Besides just a mosque, it also included a complex (kulliye) that had a school, soup kitchen for the poor, a place to sleep for travelers, and a tomb for Prince Mehmed. Sultan Suleyman was very pleased with it, but Sinan did not consider the work a masterpiece. He insisted that he could do better. 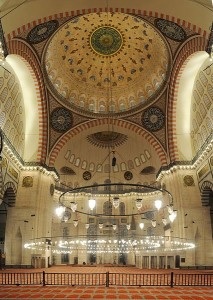 The interior of the Suleymaniye Mosque in Istanbul

The second major mosque that Sinan was in charge of was one for Sultan Suleyman himself. Suleyman wanted another giant mosque in Istanbul, this one named after him so he can accumulate the good deeds of Muslims who pray in it long after he dies. He wanted it to be a central part of Istanbul’s skyline, showing the supremacy and glory of Islam. They chose a site on top of a hill near the Golden Horn. It could be spotted from miles around at this location. The mosque took seven years to construct. Legend has it that after the foundation was laid and before the building began to rise, Sinan disappeared for five years. Furious, Suleyman demanded to know what happened to his favorite architect. After five years, Sinan returned to Istanbul and explained that the building would be so massive that the foundation needed to settle into the soil for five years before above ground building could commence.

When the mosque was completed in 1557, it was considered a true masterpiece. No other mosque in Istanbul had the interior space, the height, or the intricate detail of the Suleymaniye Mosque. With its four thin and tall minarets and its dome of over 50 meters, it was truly a new height in architecture and engineering. A kulliye surrounded the mosque that included a hospital, public baths, a library (still in use today), a soup kitchen, numerous schools teaching Quran, a school for hadith, and a primary school for children. Also part of the complex is a cemetery where Sultan Suleyman is buried.

Inside, arches with alternating red and white colors were reminiscent of the architecture of Muslim Spain, which at this point was just a memory. A giant chandelier hung in the center of the mosque, just above the heads of worshipers. In an example of environmentalism and conservation, Sinan installed special windows on the mosque. They had a screen on them that would trap the soot escaping from the candles that lit the mosque. The soot was thus prevented from fouling the air outside and would even be converted into ink to be used by calligraphers. The interior is free from the intricate designs of some other Istanbul mosques, and is beautiful for its simplicity while still being elegant. The courtyard of the mosque has Iznik tiles that wrap around it, displaying Ayat al-Kursi, one of the verses of the Quran.

Incredibly, despite the beauty and magnificence of this mosque, Sinan still believed he could do better.

When Suleyman died in 1566, his son and successor, Selim II, also wanted a mosque built in his name. The location would not be Istanbul, but instead the city of Edirne, about 200 kilometers away. Despite being in his 70s when construction began, Sinan was determined to finally top the Hagia Sophia. When the mosque was completed in 1574, he finally achieved his goal. 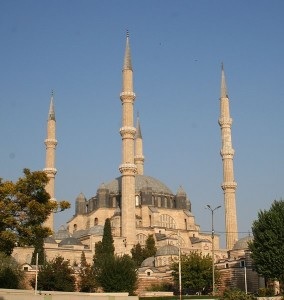 According to his autobiography, Sinan considers the Selimiye Mosque to be his masterpiece. It had the tallest minarets in the world at that point, each topping 80 meters. The dome was built on an octagonal base, thus allowing it to reach new heights that finally topped the Hagia Sophia’s dome. While some aspects of the Selimiye are similar to the Suleymaniye, it is taller Sinan’s earlier work with a taller dome that seems to rise on its own without any support from lower pillars or semi-domes. It remains today as the main landmark of Edirne, Turkey, and a masterpiece of architectural achievement that has never been matched.

Mimar Sinan died in 1588 at 98 years of age. He was buried in the cemetery of the Suleymaniye Mosque, near his greatest patron, Sultan Suleyman. During his life, he built some of the greatest monuments the Ottoman Empire has even seen. The impact he had on the Muslim world was not just limited to the mammoth mosques he built. He built over 90 large mosques throughout the empire, 50 smaller mosques, 57 colleges, 8 bridges, and numerous other public buildings throughout the Ottoman realm. His apprentices would go on to build other major landmarks throughout the world, including the Sultanahmet Mosque (Blue Mosque) in Istanbul and the Taj Mahal in Agra, India. He is considered the greatest Muslim architect of all time, and his works are some of the greatest symbols of Islam today, over 400 years after his death. 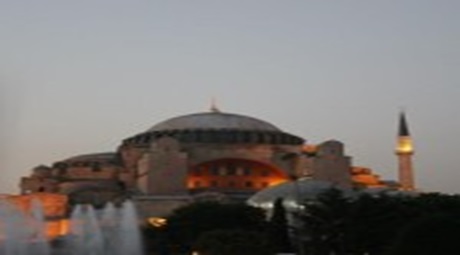 The Hagia Sophia, the inspiration for Ottoman mosques 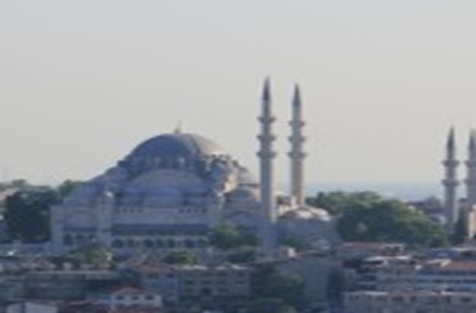 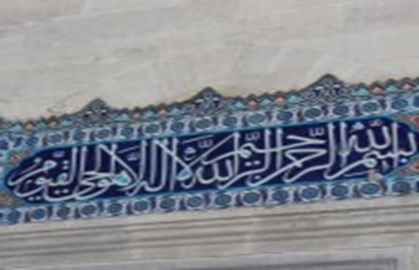 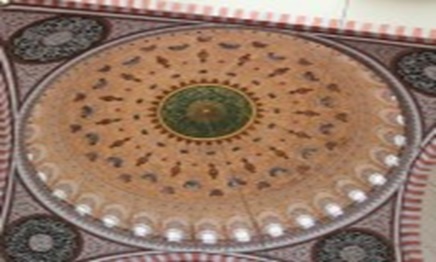 The dome of the Suleymaniye Mosque 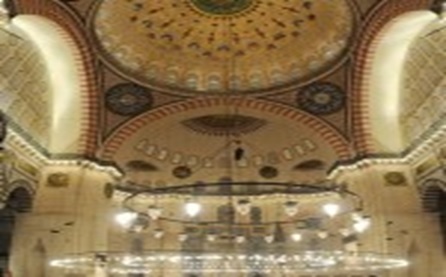 The interior of the Suleymaniye Mosque 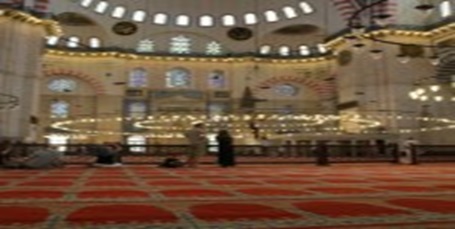 The prayer hall of the Suleymaniye Mosque

Inside the Suleymaniye Mosque 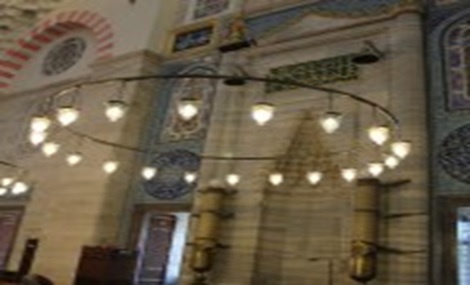 The mihrab (prayer niche) of the Suleymaniye Mosque 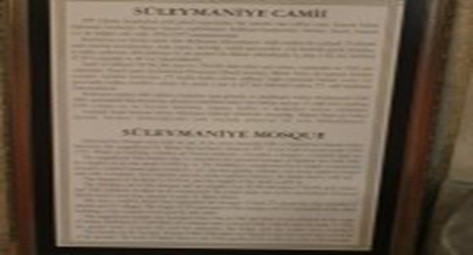 A frame in the Suleymaniye explaining its history

The exterior of the Selimiye Mosque 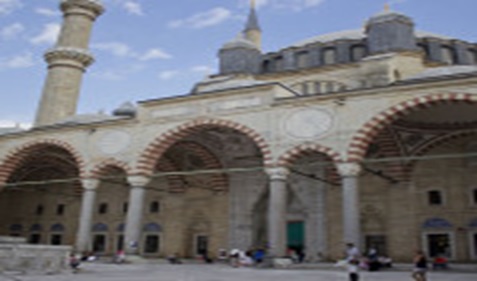 The courtyard of the Selimiye Mosque 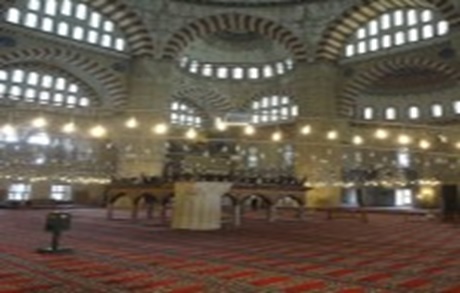 The interior of the Selimiye Mosque 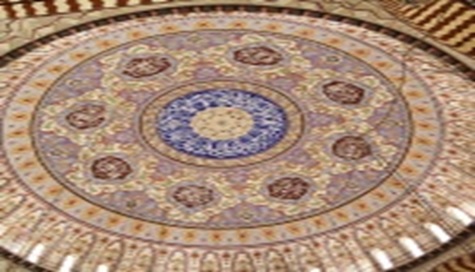 The dome of the Selimiye Mosque in Edirne