1520-Suleyman Kanuni becomes the Sultan of the Ottoman Empire

When the Ottomans began their meteoric rise in the early 1300s, they were a small band of warriors at the edge of the Muslim world. From humble beginnings under Ghazi Osman, the founder of the state named after him, they expanded throughout the region that serves as the border between Europe and Asia. Christian as well as Muslim populated lands came under their control as they brought stability to formerly Byzantine and Seljuk regions. Under sultans such as Bayezid I, Mehmed II, and Selim I, the Ottoman Empire grew to be one of the major world powers.

It’s peak was reached during the time of Sultan Suleyman, however. During his reign (from 1520 to 1566), the Ottomans were clearly the most powerful and influential power in Europe and the Middle East. His reign is seen as a golden age of Ottoman and Islamic history. Even non-Muslims acknowledged the glory of the Ottoman Empire as they nicknamed Suleyman “the Magnificent”, while among Muslims he was known as Kanuni – “the Lawgiver”. Although after his time, the long demise of the Ottoman Empire began, the strength and power of the Ottomans in the mid-1500s meant that it would take over 300 years of decline before the empire ended, in 1922. 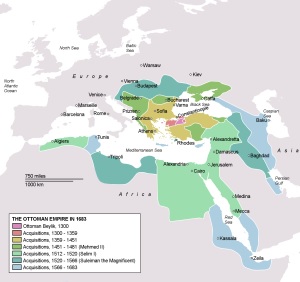 A map of the Ottoman Empire showing the size of the empire during the reign of Suleyman.

Sultan Suleyman’s father, Selim I, had greatly changed the landscape of the Ottoman Empire. Under his direction in the 1510s, the Ottomans expanded to include most of the Arab world, encompassing lands from North Africa in the West to the Arabian Peninsula, to the border of Persia in the East.

With the territorial acquisition came the title of caliph, khalifah, of the Muslim world. Since the Mongol destruction of Baghdad in 1258, the Abbasid caliphs had lived in Cairo, under the protection of the Mamluk Sultanate, although the title itself had no power, and the caliphate was just a ceremonial position. Under Selim, the caliphate was once again had meaning and real political power.

Suleyman inherited this Islamic empire in the year 1520, at the age of 26. His first order of business as sultan of the Ottoman Empire and caliph of the Muslim world was the removal of several threats that still plagued the Ottoman realm. Doing so would ensure the might of the Ottoman Empire was recognized by all, and that no one thought to take advantage of a new, young sultan.

The main land-based threat was the fortress of Belgrade, which belonged to the Kingdom of Hungary. The Hungarians had been the main northern opponent of the Ottomans since the early 1400s, and Belgrade remained a threat to Ottoman possessions in the area. Almost immediately after taking the throne, Suleyman assembled an army and set out for Belgrade in 1521. After a brief bombardment, the city came under Ottoman control and the Hungarian challenge to northern Ottoman lands was greatly diminished.

The next problem Suleyman had to deal with was the island of Rhodes, in the Mediterranean. Since the early 1300s, it had been occupied by the Knights Hospitaller, a remnant of the Crusades. Because of its vital position in the heart of the Ottoman-controlled Mediterranean Sea, the Knights of Rhodes were capable of regularly disrupting trade within the empire. Ships travelling from Egypt to Anatolia were especially vulnerable to attacks from Rhodes. This harassment led to Suleyman’s decision to dislodge the Knights Hospitaller from Rhodes in 1522.

Suleyman assembled over 100,000 troops and the massive navy he inherited from Sultan Selim for the task. He personally led the siege of Rhodes, which lasted from June to December of 1522. Eventually, the Knights were unable to hold on, despite their extensive fortifications and surrendered. Having removed the threat from Rhodes, Suleyman let the Knights relocate to Italy and added Rhodes to the Ottoman Empire.

After the removal of the Hungarian threat from the north, the Hapsburg Dynasty of Austria decided to push its claim to the crown of Hungary. The Hapsburgs then expanded out from Vienna towards Hungary and took Buda from the Ottomans, along with control of most of the Hungarian lands Suleyman had fought so hard to get in 1521 in Belgrade. This prompted a reaction from Suleyman in 1529, when he attempted to capture Vienna. 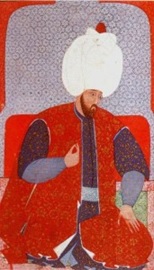 The European tradition since the Middle Ages had been that armies set out in the spring, fight throughout the summer, and then retire back to their capitals before the winter begins. This meant they wouldn’t have to fight in the bitter European winters, and risk losing soldiers to the low temperatures.

Following in this practical tradition, Sultan Suleyman set out from Istanbul in May of 1529, aiming for Vienna. Unfortunately for the Ottoman army, it was an unusually rainy summer, and their march was constantly bogged down as the roads got muddier as the summer went on. Numerous artillery pieces had to be abandoned along the road because of the bad conditions.

As a result of the weather, the Ottomans arrived at the walls of Vienna in late September, near the end of the fighting season. The siege itself ended up being relatively successful. The Ottomans got very close to conquering the city, but two weeks after the beginning of the siege, the Janissaries demanded they abandon Vienna and retire to Istanbul before the cold Austrian winter could set in. Suleyman was forced to give in to their demands and the siege was lifted. His attempt to dislodge the Hapsburgs had failed. Vienna ended up marking the maximum extent of the Ottoman Empire, as they were never able to expand past that. After 230 years of growth, the Ottomans had reached their high water mark.

Perhaps Suleyman’s greatest accomplishment and the one he is most remembered for is his reform of the legal code. The Ottoman legal code had two facets. The first was the Shari’ah, the unchanging divinely ordained laws according to Islamic tradition, which is derived from the Quran and the actions of Prophet Muhammad ﷺ. The second was the laws dictated by the sultan of the time, known as Kanuns. These sultanate laws covered aspect of life not explicitly covered by the Shari’ah, such as taxes, police regulation, and other day to day affairs of the empire. 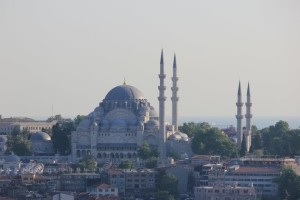 During the reigns of the previous nine sultans, from Osman to Selim, hundreds of Kanuns had accumulated, and the legal code was getting to be almost impossible to use. Because of this, Suleyman set out to organize all the previously issued laws. He worked personally with the grand mufti of the empire, the Shaykh al-Islam, Ebussuud Efendi, to go through all the laws, and determine if they contradicted the Shari’ah or other Kanuns. By removing any anti-Islamic laws and laws that repeated or contradicted each other, Suleyman and Ebussuud Efendi managed to formulate an effective and simplified code of laws, known as the Kanun-i Osmani (The Ottoman Laws) that served the Ottoman Empire for the next 300 years. For this, Suleyman was given the nickname Kanuni, meaning “lawgiver”.

Taxes were also a point of interest for Suleyman. In the Kanun-i Osmani, he made sure to relieve taxes on many of his subjects, particularly Christian peasants. Much of the population of the Ottoman Empire at this time was Christian, and keeping their loyalty and happiness was a priority for Suleyman. By relieving them of some taxes, the financial status of Christian peasants in the empire greatly improved. In fact, since the taxes on Christians in the Muslim Ottoman Empire were lower than the taxes on Christians in Christian Europe, many Christian Europeans migrated into the Ottoman Empire during Sultan Suleyman’s reign, preferring to live under a Muslim leader than Christian ones.

Sultan Suleyman is considered to be one of the most successful Ottoman sultans in history. His reign was marked by the maximum territorial size of the empire, just and orderly laws, and a cultural and educational golden age. The monuments of Suleyman’s artistic patronage dot Istanbul’s landscape today. The Şehzade Mosque and Suleymaniye Mosques were built by Mimar Sinan at the request of Sultan Suleyman in Istanbul. Today they stand as lasting legacies of his golden age reign over the largest and most powerful Muslim empire of the 16th century.