1400-The Sultanate of Malacca is founded

As a crossroads of trade between the Indian Ocean and East Asia, the Malay Archipelago has consistently been a wealthy, diverse, and politically important region. Islam began to spread in the region through trade not long after the life of Prophet Muhammad (S). For centuries, the people of Southeast Asia slowly began to accept Islam and create Muslim towns and kingdoms.

Perhaps the most important of these kingdoms was the Sultanate of Malacca (Melaka in Malay), which reached its peak in the mid-1400s. As a powerful and influential kingdom, the continued spread of Islam was intricately tied with the rise of the Malacca Sultanate. Unfortunately, however, the Malacca Sultanate would not last, as the newly powerful Portugal conquered the kingdom in 1511 and began a centuries-long period of European domination.

The Rise of Malacca 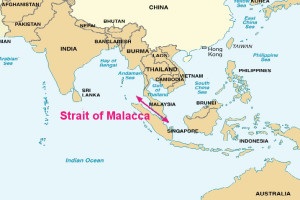 The Strait of Malacca

One of the most important highways of trade in the pre-modern world was the Strait of Malacca. Bordered on its northern side by the Malay Peninsula and on the southern side by the island of Sumatra, it was the main connection between the Indian Ocean and the South China Sea. As a result, most trade traffic in the region passed through this narrow strait, creating rich trade kingdoms on its shores.

Around the year 1400, a local king, Iskender Shah, established a new kingdom in the present-day location of Malacca, on the North Shore of the Malacca Strait. Some accounts attest to him being a convert to Islam, while others do not support this theory. In any case, within decades, the sultanate he founded, the Sultanate of Malacca, became one of the major promoters of Islam in the region.

As a powerful and expansive kingdom, the Sultanate of Malacca provided a common culture for the surrounding region that neighboring states attempted to adopt. This unified culture helped spark the spread of Islam throughout the region. Adopting Malay culture and converting to Islam were so connected that it was said when someone became Muslim, they masuk Melayu, meaning they "entered the realm of the Malays".

Adding to the spread of Islam in the region was the continued presence of Indian and Arab Muslim traders coming from the West and bringing their religion with them and spreading it to the local population. Another factor were the numerous visits by the Chinese Muslim admiral Zheng He (who is known as Cheng Ho in Southeast Asia) who helped spread Islam throughout the Malay Archipelago. It is important to note that as the region slowly made its way into the fold of Islam, there were no forced conversions into the region.

The Arrival of the Portuguese 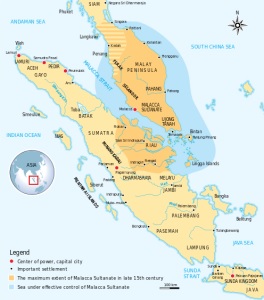 The Sultanate of Malacca at its greatest extent in the late 1400s.

In the late 1400s, the Kingdom of Portugal began to search for new trade opportunities on the high seas. Instead of relying on land routes to Asian spice markets (that were dominated by the Venetians), the Portuguese decided to find a sea route to China. The explorer Vasco de Gama managed to sail around the southern tip of Africa in the late 1400s, with the aid of Muslim navigators who were familiar with the Indian Ocean.

With this new discovery in Europe, Portugal quickly became a naval power in the Indian Ocean and attempted to dominate the Asian spice market. After establishing bases in Indian cities such as Goa and Calicut around 1510, the Portuguese looked to the East to expand their trade empire. In 1511, they decided to conquer the important port of Malacca to control the trade with China. At first they attempted to create friendly relationships with the sultan of Malacca, Mahmud Shah and use that as a foothold in the kingdom. However, after being warned by Tamil Muslims who had seen Portuguese atrocities in Goa, Sultan Mahmud refused to allow the Portuguese into the city. 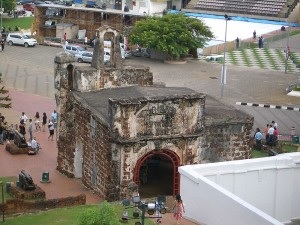 Ruins of the fortress of A Famosa

As a result, on July 25th, 1511, the Portuguese commander, Afonso de Albuquerque, began an assault on the city. Despite allying with neighboring Muslim states, the Sultanate was unable to resist the superior Portuguese weapons and firepower, and by late August the city was conquered. The Portuguese soon began construction on a fortress, known as A Famosa which helped protect the Portuguese in the city from Malay counter-attacks. Much of the city center, including the main mosque and government buildings, was destroyed to provide stone for the fortress. This was the official end of the Sultanate of Malacca as the region came under foreign domination for the first time in its history.

For the next 150 years, the Portuguese would control the famous and rich Strait of Malacca and attempt to subjugate the local population of Malays. Attempts to convert people to Catholicism were overall a failure, but the economic and political domination of the region that would later become Malaysia and Indonesia would continue into the 20th century. After the Portuguese came the Dutch in the 1600s and the British in the 1800s. Despite the European colonial period, Islam continued to flourish in the region and still provides the basis for society in Southeast Asia.