The 40th president of the United States, Ronald Reagan famously stated in a piece in the New York Times in 1993,

And, no, I did not personally know Ibn Khaldun, although we may have had some friends in common!”1

Although one may agree or disagree with the conservative economic policies of Ronald Reagan, there is no denying the genius of the man he is quoting – Ibn Khaldun. He was centuries ahead of his time. His monumental work, the Muqaddimah, published in 1377, is hard to categorize. All at once it is a resource on history, Islam, science, sociology, economics, politics, warfare, and philosophy. One article on the entire book would be a disservice to Ibn Khaldun and the great amount of knowledge he left for subsequent generations. Instead, this article will focus only on some of his economic ideas, which centuries later form some of the basic ideas we use in government taxation today.

Who is Ibn Khaldun?

He was born in 1332 in Tunis, North Africa to a family of wealthy Andalusians. His family had been forced to flee the Iberian Peninsula in the middle of the Christian conquest of that land from Muslim rulers. At a young age he was educated in the religious studies of Quran, Hadith, jurisprudence, and law, as well as sciences such as physics, mathematics, logic, and philosophy. His strong base in a wide variety of disciplines would help shape his understanding of the world and the way he analyzed it. 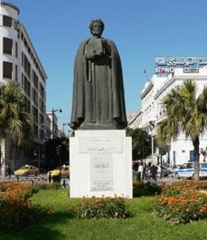 A statue of Ibn Khaldun in Tunis, Tunisia

Early in his adult life, he held a number of minor clerical posts across North Africa. When he was offered a job in the emirate of Granada in al-Andalus (Spain) in 1364, he jumped at the opportunity. He worked there as a successful diplomat for government of Granada, working out a peace treaty between Granada and neighboring Christian states. Political intrigue, however, led to him to abandon his post and move back to Africa, where he compiled his Muqaddimah.

It is telling that Ibn Khaldun’s discussion of economics is almost always tied to a discussion of government, and the rise and fall of dynasties. He claims that dynasties have a natural life span, almost never going longer than three generations, at which point a new dynasty rises to replace it. Directly tied to this lifespan, is a pattern of taxation that helps determine how long a dynasty or government will actually last.

At the beginning of his section on tax revenues, he states the quote mentioned by Ronald Reagan about low taxes meaning high revenues and high taxes meaning low revenues (for the government). In the next sentence, Ibn Khaldun gives a reason for this:

The reason for this is that when the dynasty follows the ways (sunan) of the religion, it imposes only such taxes as are stipulated by the religious law, such as charity taxes, the land tax, and the poll tax. They mean small assessments, because, as everyone knows, the charity tax on property is low.2

Islamically, the religious guidelines for taxes are in fact quite low. The zakat (charity tax), which goes to the poor and not the government, is only 2.5% of accumulated wealth (in gold, silver, or general currency). The other taxes, including land taxes, and poll taxes have historically never been oppressively great in the Muslim world. Ibn Khaldun is making the argument here that when a government abides by its Islamic principles and does not attempt to tax the people excessively, they will find greater success in generating tax revenues.

In conjunction with this, in the next section Ibn Khaldun states that one of the reasons that early tax revenues are so successful is because early in a dynasty the ruler usually is more interested in the unity and cohesion of the state than his own personal wealth:

“At the beginning of the dynasty, the revenues are distributed among the tribe and the people who share in the ruler’s group feeling, in accordance with their usefulness and group feeling and because they are needed to establish the dynasty, as we have stated before. Under these circumstances, their leader refrains in their favor from (claiming) the revenues which they would like to have.”3

Here Ibn Khaldun is offering an explanation of why low taxes are effective early in a dynasty – the lack of government corruption. As long as the government is interested in the unity of the state and the effectiveness of the government, the tax revenues will be used to support and strengthen the state’s offices. In contrast, when an empire becomes corrupt, with a large proportion of the tax revenue going straight towards the ruler’s personal expenses, taxes must naturally be raised to support such uses.

A legendary example of this was the second Caliph of Islam, Umar ibn al-Khattab, who ruled from 634 to 644. He was known to have two different lamps that he would use to light his house. One lamp was funded by tax payer money, and he would use that one only while doing work in his official capacity as the political leader of the Muslim world. The second lamp was funded by his own personal money, and he used it while doing anything besides governmental work. His reason for this was to not waste the tax money of the state on his personal expenses. Thus, during the reign of Umar the newly established Muslim empire was highly effective in most enterprises.

Another example was the reign of Salah al-Din in the 1100s. When he died in 1193, he was known to have only had a few gold and silver coins in his possession, despite being the sultan of Egypt and Syria. He famously used any government money on strengthening the army or other parts of the government. With such actions, he was able to build a strong state that liberated Jerusalem from Crusader control.

The result [of high taxation] is that the interest of the subjects in cultural enterprises disappears, since when they compare expenditures and taxes with their income and gain and see the little profit they make, they lose all hope. Therefore, many of them refrain from all cultural activity. The result is that the total tax revenue goes down, as (the number of) the individual assessments goes down.4

Ibn Khaldun is making the argument that when a government taxes people greatly (particularly those who have the ability to create jobs), they will no longer feel an incentive to invest their money in more business enterprises (he refers to business enterprises as “cultural activities” here). The reason for this is simple: if the government taxes your money, you have less money to spend on your business, leading to economic stagnation and a thus a decline in tax revenue in general. 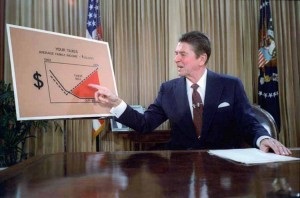 President Reagan in 1981 explaining a tax reduction plan in a televised address. Reagan was heavily influenced by supply-side economic ideas.

This idea is today one of the basic principles of supply-side economics. People who support supply-side economics argue that corporations and the wealthy should have low tax rates. The low tax rates will give them more money on hand that can be used to expand business, thus giving more economic opportunities (through jobs) for those who are less wealthy. For this reason, this approach is also called “trickle-down economics”. This forms the basis of many conservative economic policies in the modern world. Conservative politicians (such as Ronald Reagan) have used this approach to defend lower tax rates for the wealthy against more liberal economic ideas of higher taxes on the wealthy. 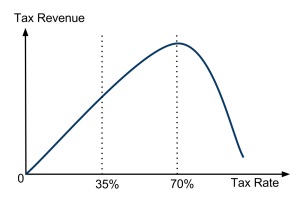 Ibn Khaldun’s ideas about finding a balance in taxation that leads to higher revenues later became known as the Laffer Curve. The Laffer Curve is used by economists today to determine the perfect taxation rate to produce the most government revenue. The curve usually takes a parabolic shape, with excessively low tax rates leading to low revenues and excessively high tax rates also leading to low revenues. According to this idea, there is a perfect tax rate in the middle that would lead to high revenues without taxing people so much that the incentive to invest further in business is discouraged.

The Laffer Curve is named after American economist, Arthur Laffer. Laffer himself does not claim to have invented to idea, however. He made clear that he got the idea from Ibn Khaldun, stating:

“The Laffer Curve, by the way, was not invented by me. For example, Ibn Khaldun, a 14th century Muslim philosopher, wrote in his work the Muqaddimah: ‘It should be known that at the beginning of the dynasty, taxation yields a large revenue from small assessments. At the end of the dynasty, taxation yields a small revenue from large assessments.’ “5

Clearly, the economic ideas of Ibn Khaldun regarding tax rates were far ahead of his time. Although he lived in the 1300s, his ideas still form much of the basis for modern capitalist thought. The economic and governmental ideas provided in his Muqaddimah are timeless guidelines that should clearly have a role in the modern world. The truly amazing thing, however, is that this article only touched upon some of Ibn Khaldun’s economic ideas. The Muqaddimah is also packed with philosophies of history, government, religion, sociology, psychology, and education. The true genius of this Muslim man from North Africa is far beyond just tax rates and Laffer Curves.