Throughout Islamic history, Arabic calligraphy has always been one of the most important and valued forms of art. Unlike Christian Europe, where portraits and paintings were the main form of artistic impression throughout the Renaissance and early modern period, Islamic history is full of more abstract forms of art, architecture, and calligraphy. One of the most elaborate and intricate forms of calligraphy was the tughra, a design used mostly by Ottoman sultans as their signature and seal. 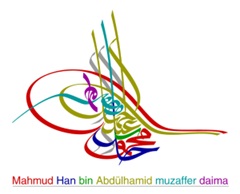 The tughra of Sultan Mahmud II, with color coding showing the numerous aspects of a tughra.

The first known tughra of an Ottoman sultan is attributed to Orhan, the second Ottoman ruler, who ruled from 1326 to 1362. The original tughras were meant to show the official character of the Ottoman state and sultan, as well as serve as his official signature and seal. Thus, the tughra was intentionally made difficult to read and copy, to prevent forgeries and ensure the authority of the sultan. The earliest tughras were written to seal official letters, declarations and coins.

A tughra was meant to have a very specific style and form. There are numerous theories about how this form came about. Some speculate that the earliest illiterate Turkish leaders would dip their thumbs and first three fingers into ink and stamp papers with their handprints, and the tughra is meant to replicate that general form. Others speculate that the three tall lines in a tughra symbolize the three continents that the Ottomans controlled land in (Europe, Asia, and Africa). 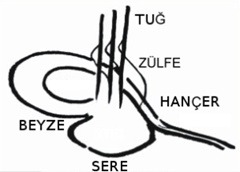 The visual elements of a tughra

Whatever the reasons for its form, the tughra form was very specific and had rules that could not be broken. The most noticeable part of the tughra is the beyze, Turkish for egg. It is the large oval shape that juts out to the left. It has an inner and outer egg, which are usually highly stylized letters that are part of the sultan’s name. These letters would form a large loop, come back towards the right and end in two curved lines that go off the right end of the tughra. These two eggs were meant to symbolize the Black Sea and the Mediterranean Sea, which the Ottomans controlled at their peak.  Through these curves run three straight vertical lines, usually being part of the letters alif (ا) or laam (ل) in the sultan’s name. Coming down from these lines are wavy curves that do not necessarily represent any letters. Instead, they supposedly represent the movement of the Ottomans (and Turks in general) from East to West. At the bottom of the tughra is its base, where most of the writing is. Here, in a very small and cramped area, would the sultan’s name be written, along with the name of his father, and numerous honorifics and prayers to God asking for the sultan’s victory and success.

Below is a gallery of some of the more notable tughras from Ottoman history. 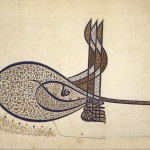 The tughra of Sultan Suleyman Kanuni (r. 1520-1566). This particular tughra is known as one of the most elaborate and beautiful in Ottoman history. 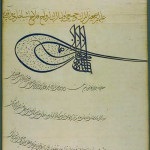 A letter from sultan Suleyman to a French ambassador, bearing his tughra. 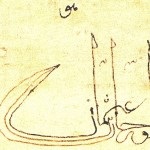 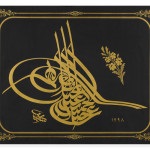 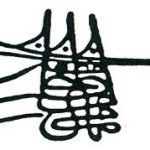 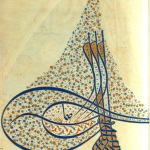 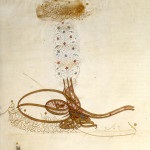 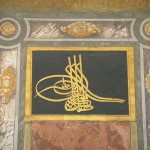 A tughra at Topkapi Palace, the home of the Ottoman sultans.