1299-The Ottoman Empire is founded

According to the political philosophy of Ibn Khaldun, empires have lifespans like humans. They are born, grow, reach maturity, and then decline and die. Understanding the infancy of empires is crucial to understanding why an empire became powerful, and where it derives its strength from.

This article will look at the infancy of the Ottoman Empire. From a small Turkish state in Anatolia in the 1300s, the House of Osman ended up ruling a state that extended throughout Eastern Europe, Southwest Asia, and North Africa in the 1500s. The early period of the Ottoman State sowed the seeds for this great empire.

In the summer heat in the year 1071, a history-changing battle was raging in the eastern part of Anatolia (present-day Turkey). The Seljuk Turks, a group with origins in Central Asia, had built a powerful Muslim empire throughout Southwest Asia in the decades before, and were now clashing with the mighty Byzantine Empire, which had ruled these lands for centuries. In fact, warfare between the Byzantines and the Muslims had been an on-and-off affair since the 600s. The result of the Battle of Manzikert in 1071 was a decisive Seljuk victory the likes of which no Muslim army had seen before, with the Byzantine army in tatters. 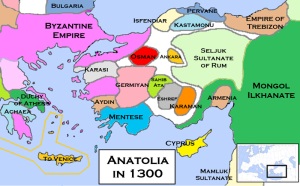 The beyliks of Anatolia around 1300, with Osman’s beylik in red.

Over the coming decades and centuries, Anatolia was opened up to Turkish settlement. Turks migrated from their homelands to the former Byzantine territory and created their own towns and cities, while intermarrying with the local populations, who were converting to Islam.

Over time, the militias developed into small independent states. These states were known as beyliks, and were centered around the idea of a ghazi society. At the center of each state was a leader who directed the ghazis of that beyliks, and led them in war. In the late 1200s, numerous beyliks existed throughout the Anatolian peninsula.

One of these beyliks was that of ghazi by the name of  Osman. He was born in 1258, the same year Baghdad was destroyed by the Mongols, and the fate of his beylik was interconnected with these Mongol wars. Legend has it that Osman once had a dream in which a tree grew out of his chest. It’s roots and branches grew to cover Asia, Europe, and Africa. Osman’s shaykh, who he regularly relied upon for Islamic guidance interpreted the dream as a sign that Osman’s descendants would be at the center of an empire that controlled these three continents. 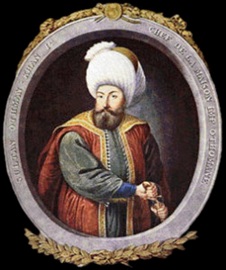 Well before his descendants could attempt to make his dream a reality, Osman’s beylik was centered around the town of Söğüt in northwestern Anatolia. The borders of his small state pressed right up against the Byzantine Empire. This made being a ghazi much more important and central to Osman’s life. As a result, his stature grew among the other Turkish beyliks of Anatolia, and ghazis rushed from all over to join his growing state.

Another source of population for Osman was refugees fleeing Mongol invasions in the East. The Mongol armies were still wreaking havoc on Southwest Asia, and refugees ran to the edges of the Muslim world to escape. Thus, many of them found a new home in Osman’s beylik.

With a huge influx of warriors, Osman was able to continue pressing against the Byzantine Empire. The Byzantines at this point were in full decline. Their golden age had ended long ago, and the fledgling empire could barely hold off Osman and his fierce ghazis. The result was that Osman greatly expanded his territory throughout the opening years and decades of the 1300s. It was this time that historians consider the transformation the beylik of Osman into an empire. The Ottomans themselves called their state Devlet-i Osmaniyye, Turkish for “The State of Osman”. The English word “Ottoman” is a corruption of Osman’s name.

Osman died 1326, after having laid the foundation for an empire that would last until 1922. All future sultans of the empire were girded with the sword of Osman when they took power. This signified their role as a ghazi first and foremost, and their attachment to the patriarch of the dynasty. Osman’s son, Orhan, took power after his father, and was given a very important bit of advice from Osman:

“Son! Be careful about the religious issues before all other duties. The religious precepts build a strong state. Do not give religious duties to careless, faithless and sinful men or to dissipated, indifferent or inexperienced people. And also do not leave the state administrations to such people. Because the one without fear of God the Creator, has no fear of the created. One who commits a great sin and continues to sin can not be loyal. Scholars, virtuous men, artists and literary men are the power of the state structure. Treat them with kindness and honor. Build close relationship when you hear about a virtuous man and give wealth and grant him…Put order the political and religious duties. Take lesson from me so I came to these places as a weak leader and I reached to the help of God although I did not deserve. You follow my way and protect Din-i-Muhammadi [Islam] and the believers and also your followers. Respect the right of God and His servants. Do not hesitate to advise your successors in this way. Depend on God’s help in the esteem of justice and fairness, to remove the cruelty, attempts in every duty. Protect your public from enemy’s invasion and from the cruelty. Do not behave any person in an unsuitable way with unfairness. Gratify the public and save all of their sake.”

From this we can clearly see the emphasis that the Ottomans placed on Islam. Not only does Osman give his son sound administrative advice, but he intertwines that advice with the characteristics of a good Muslim. This speech was not meant just for his son Orhan. All subsequent Ottoman sultans would look towards this advice from their forefather to help them rule the empire effectively and Islamically.

The tomb of Osman in Bursa

Orhan went on to expand his father’s empire by conquering the important city of Bursa from the Byzantines early on in his reign. During the coming decades, Orhan, then Murad I, and then Bayezid I continued to expand the Ottoman State. On the one hand, they would conquer territory from the Byzantines (eventually expanding into Byzantine territory in Europe) in the West, and on the other, they would absorb the other Turkish states through alliances, marriage, and in some cases, war. By the end of the 1300s, the empire had grown to include most of the former Byzantine Empire, with the exception of the city of Constantinople, which would not be conquered until 1453.

While the Ottoman Empire would experience many ups and downs in its illustrious 600 year history, the origins and rise of the empire must be understood to fully comprehend how the Ottomans viewed themselves and their role in the world. From their origins as a small Turkish beylik centered around a ghazi society, they expanded to become one of the most powerful empires in early modern history. With the emphasis that the early Ottomans placed on the ghazi lifestyle and the defense of Islam, we can begin to understand how this empire rose to the heights it reached in the 1400s and 1500s.