1095-Al-Ghazali and the Revival of Islamic Scholarship

Prophet Muhammad ﷺ promised that every century, a re-newer of the faith of Islam will arise. Throughout history, great Muslim intellectuals, rulers, generals, and artists have come and managed to rejuvenate faith in the Muslim world and help Muslims deal with the problems of that age. For each one of these great figures, a specific historical context was necessary for them to accomplish what they did.

One of the greatest renewers of the faith in history was the 11th century scholar Abu Hamid al-Ghazali. Today, he is known as Hujjat al-Islam, the Proof of Islam, because of his efforts in intellectually fighting against some of the most dangerous ideas and philosophies that plagued the Muslim world during his time. From the ubiquitous nature of ancient Greek philosophy to the rising tide of political Shi’ism, Imam al-Ghazali did not leave a stone unturned in his effort to bring back serious Islamic scholarship in the face of heterodox threats.

Abu Hamid al-Ghazali was born in 1058 in the city of Tus, in modern Iran. He hailed from a Persian family but was fluent in Arabic, which he wrote in, like many other Muslim scholars of his era. He was educated in the basics of Islam and Islamic law from an early age, and counted the eminent Shafi’i scholar al-Juwayni among his teachers. 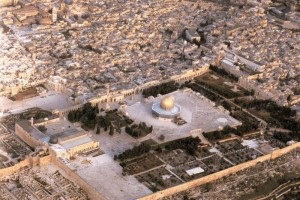 During his self-imposed exile, al-Ghazali lived in the al-Aqsa Mosque.

After completing his education, he joined the court of the Seljuk vizier Nizam al-Mulk in Isfahan in 1085. Nizam al-Mulk was known for his efforts to establish advanced educational centers around the Muslim world. He thus appointed al-Ghazali as a teacher in the Nizamiyya School in Baghdad in 1091. In Baghdad, al-Ghazali had a very prestigious position and regularly attracted huge crowds to his lectures.

In 1095, however, al-Ghazali experienced a spiritual crisis during which he began to doubt his intentions in teaching. He stated in his autobiography that his intention “was not directly purely to God, but rather was instigated and motivated by the quest for fame and widespread prestige.” Recognizing his spiritual dilemma, he abandoned his post at the Nizamiyya and traveled to Damascus, Jerusalem, and the Hejaz. During his travels, he focused on tazkiya (purification) of his soul and analysis of the various approaches to Islam that were popular during his day.

He did eventually go back to Baghdad in 1106 and began teaching again. His travels and search for a way to purify his intentions had a huge influence on his public role, and he was sometimes met with controversy during his stay in Baghdad. He eventually moved back to his hometown of Tus, where he died in 1111.

In his autobiography, Deliverance from Error, al-Ghazali describes the approaches to finding truth that people follow. One of the popular ideologies at the time was philosophy, based on the ancient Greek philosophical models of Aristotle. Prominent Muslim proponents of Aristotelian philosophy included Ibn Sina and al-Farabi.

The dangers of Aristotelian philosophy and logic, according to al-Ghazali, was the conclusions the philosophers came to. Some philosophers would come to believe things such as the eternity of the world and the non-existence of God, or that God is not all-knowing. For al-Ghazali and other Muslims grounded in orthodox Islamic beliefs, these new ideas were counted as disbelief in the tenants of Islam.

As al-Ghazali saw it, no Muslim scholar had so far managed to effectively refute these philosophers. Since the philosophers were experts at logic and argument, they appeared to make very clear and sensical arguments for their positions, despite the fact that those positions directly contradicted Islamic belief.

Al-Ghazali took on the challenge of showing the problems in the philosophers’ arguments on their own terms in The Incoherence of the Philosophers, which was published in 1095. Using the philosophers’ logic against them, he managed to clearly show the holes in the philosophical arguments that led to disbelief. To do this, he had to delve deeply into philosophy itself, a practice he did not recommend for the masses  Throughout his writing, he emphasizes the importance of being firmly grounded in correct belief before delving into heterodox beliefs.

Another major problem that al-Ghazali had to deal with was the rising tide of Muslims who accepted the Ismaili Shi’a belief that an infallible Hidden Imam is a valid source of Islamic law and creed. For the Ismailis,who ruled Egypt during al-Ghazali’s life, the prophethood of Muhammad ﷺ was not the final word in religious matters, and a special holy figure, known as an Imam, can be turned to for guidance.

In Deliverance from Error, al-Ghazali refuted their claims of having an Imam on a scriptural basis, by showing that there existed no authentic narrations of Prophet Muhammad ﷺ regarding an Imamate after his death. He also went beyond that to logically answer the claims that an Imam is necessary by analyzing the role of Islamic law and how it is derived. Without going too far into his proofs (which are much better understood by reading his original work), he comes to the conclusion regarding the Ismailis that:

“The substance of their doctrine comes down to deceiving the common folk and the dimwitted
by showing the need for the authoritative teacher.”1

After analyzing the approaches to Islam through philosophical, Shi’a, and other means, al-Ghazali comes to the conclusion that the only effective way to understand the world is through the authentic practice of Islam as was taught by the Prophet ﷺ and early generations. At his time, this was being practiced by the Sufis, a group who renounced dependence on this world and focused entirely on purification of their own souls in an attempt to better serve Allah.2

A common accusation that has been leveled at Imam al-Ghazali by Orientalist scholars is that his refutation of philosophy led to a general decline of Islamic scientific advancement. They base their claims that many of the people that al-Ghazali refuted, such as Ibn Sina and al-Farabi, were some of the leading scientific scholars of the day. The truth, however, is of course more nuanced.

While al-Ghazali clearly did take issue with the philosophical ideas of scholars who also wrote great mathematical and scientific treatises, he makes very clear the distinction between philosophy and science. Al-Ghazali states:

“Whoever takes up these mathematical sciences marvels at the fine precision of their details and the clarity of their proofs. Because of that, he forms a high opinion of the philosophers and assumes that all their sciences have the same lucidity and apodeictic solidity as this science of mathematics.”3

The danger in studying mathematics and other sciences, argues al-Ghazali, is not that the subject itself is contrary to Islam and should be avoided. Rather, the student must be careful to accept the scientific ideas of scholars without blindly accepting everything they say regarding philosophy and other problematic subjects.

He goes on to state that there is another danger for an ignorant student of the sciences, and that is the rejection of all scientific discoveries of scholars on the basis that they were also philosophers with heterodox beliefs. He states:

“Great indeed is the crime against religion committed by anyone who supposes that Islam is to be championed by the denial of these mathematical sciences. For the revealed Law nowhere undertakes to deny or affirm these sciences, and the latter nowhere address themselves to religious matters.”4

When one reads Imam al-Ghazali’s works at a very superficial level, one can easily misunderstand what he is saying as anti-scientific in general. The truth, however, is that al-Ghazali’s only warning to students is to not fully accept all the beliefs and ideas of a scholar simply because of his achievements in mathematics and science. By issuing such a warning, al-Ghazali is in fact protecting the scientific enterprise for future generations by insulating it from being mixed with theoretical philosophy that could eventually dilute science itself to a field based on conjecture and reasoning alone.

This article does not attempt to provide a comprehensive overview of Imam al-Ghazali and all his ideas and contributions. To do so would require full textbooks analyzing his writings. Instead, the purpose is to show the impact that al-Ghazali had on his own era and subsequent Islamic history.

Imam al-Ghazali today is known as Hujjat al-Islam, Arabic for “the Proof of the Religion” due to his contributions in protecting the Muslim world from the intellectual challenges that were facing it. Traditional Islamic beliefs and practices were being confronted by a rise of nihilistic philosophy and extreme Shi’ism that threatened to erase change the face of Islamic scholarship forever. Due to his efforts and the numerous scholars he inspired, the path was paved for the resurgence of Islamic belief as it was taught by the Prophet Muhammad ﷺ, free from external corruption. His life clearly kept in line with the saying of the Prophet ﷺ promising a renewer of the faith every century, 500 years after it was spoken.

A distinction should be made between the Sufism of Imam al-Ghazali and some of the various brands of Sufism today. Al-Ghazali’s support of the Sufis in his time should not be taken as a blanket endorsement of all Sufi ideologies today, some of which may lead to innovation or misguidance. In Imam al-Ghazali’s time, Sufism at its core simply meant purifying the soul and turning it towards Allah, as al-Ghazali states about the Sufis:”The aim of their knowledge is to lop off the obstacles present in the soul and to rid oneself of its reprehensible habits and vicious qualities in order to attain thereby a heart empty of all save God and adorned with the constant remembrance of God.”