832 – The House of Wisdom Is Established 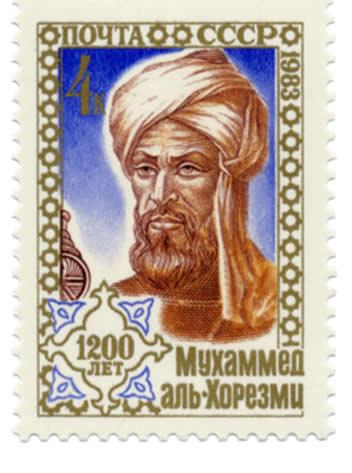 Modern theoretical mathematics is a complex and abstract field. It frustrates and annoys secondary school students in math classes, but also provides the basis for all the technological wonders we enjoy today. Without the incredible mind of a 8th century Muslim mathematician, al-Khawarizmi, the world of math today would look vastly different.

Muhammad al-Khawarizmi was born in 780 AD in Khorasan, a province in the east of Persia, right on the legendary ancient Silk Road between China and Rome. Goods were not the only commodity traded on the Silk Road. Knowledge of the East and the West traveled on this legendary path, and a young al-Khawarizmi benefited greatly from it. When the Abbasid Caliph, al-Ma’mun established the House of Knowledge in Baghdad in 832, he called al-Khawarizmi to the city personally. Al-Ma’mun believed in rationalism, and had a simply daunting task for al-Khawarizmi: prove the existence of Allah, through the complexity and beauty of mathematics.

Al-Khawarizmi, like many of his colleagues, got to work translating ancient Greek and Indian texts. The knowledge of giants such as Pythagoras, Euclid, and Brahmagupta was the pedestal this new generation of scholars would stand on. But al-Khawarizmi’s contributions only begin with translation of Greek and Hindu texts.  From the great Indian book on math, The Opening of the Universe, al-Khawarizmi adopts the idea of the zero as a number. This opened up a whole new world of mathematical possibilities and complexities.

Using the old Roman numeral system made advanced math next to impossible. With a number system that goes from 0 to 9, al-Khawarizmi is able to develop fields such as algebra, which he initially used to calculate Muslim inheritance laws. He builds more on the geometry of the Greeks, and develops the basic ideas many high school math students can recognize today.

But his real issue remains with the number zero. It cannot be proven to exist using math. The old Indian texts insist zero divided by zero equals zero. But al-Khawarizmi knows that any division by zero is impossible. Eventually he comes to the conclusion that the zero must simply be accepted without being proven. Furthermore, he reports to the Caliph al-Ma’mun that belief in Allah is the same: it cannot be proven using science, but must be accepted on faith in the religion. Al-Khawarizmi was as much a philosopher as he was a mathematician.

In addition to math, he writes a compendium on geography that lists the latitude and longitude of 2,400 cities around the world. He also writes books on the astrolabe, sundials, and even the Jewish calendar. For 700 years after his death, European mathematicians cite him in their works, referring to him as “Algorismi”. The modern word for a complex mathematical formula, algorithm, is derived from his name. His legacy lives on, even if the modern world that he helped build has all but forgotten of his contributions.