637 The al-Aqsa Mosque Through the Ages: Part 2

In Part 1 of this article, we saw the early history of the third holiest site in Islam: the al-Aqsa Mosque. From a Roman and Byzantine dumping site to a modest mosque built by 'Umar ibn al-Khattab, to a giant complex crowned by the Dome of the Rock in Umayyad times, Islam played a major role in the history of the Haram al-Sharif complex in the early centuries of Islam. As the Fatimids came to power in the 900s, however, orthodox Islam was replaced with extremist Ismailism and Fatimid propaganda.

In the second part of this article, we will look at the threat the Crusaders posed to the mosque and the subsequent history of the area in Mamluk and Ottoman times.
Crusaders
In 1095, the Byzantine emperor Alexios requested help from Pope Urban II in Rome in his perpetual war against the Seljuk Turks in the Anatolian Peninsula. The Pope's response was the First Crusade, whose purpose was not to fight the Seljuks, but instead to conquer Jerusalem from the Muslims and establish a Catholic kingdom in the Holy Land. 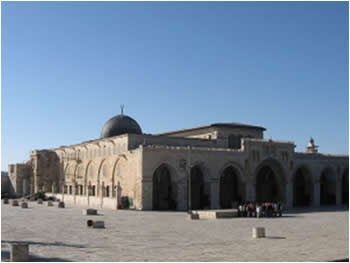 The Crusaders used the al-Aqsa Mosque as a palace in the 1100s.

Despite being in the heart of the Muslim world, Jerusalem was vulnerable to the Crusaders. Disunity was king in the Middle East among Muslim governors and generals. As the Crusaders pressed on towards Jerusalem, most cities refused to fight the Crusaders and allowed them to continue on their way to the holy city.

When the Crusaders entered, one of the most horrific events in the history of the al-Aqsa Mosque was perpetrated. Since the Crusaders made clear that they would be taking no prisoners, a large portion of the Muslim population of the city fled to the mosque and sought safety there. Holy site or not, the Crusaders were determined to be done with every Muslim in the city. They entered the mosque with weapons drawn, determined to kill everyone in the mosque. 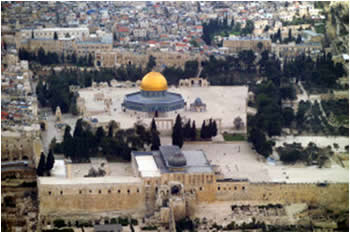 An aerial view of the Haram al-Sharif. The Dome of the Rock is in the center of the image and the al-Aqsa Mosque itself is in the foreground with the silver dome.

For the Crusaders, the elimination of Jerusalem's Muslims allowed them to go about transforming the Haram in their own vision. The first ruler of the new Kingdom of Jerusalem, Godfrey, took up residence in the al-Aqsa Mosque. The interior of the masjid was completely renovated to turn it into a palace with new internal walls, rooms, and gardens. Of course, all signs of its Muslim past were covered up. Calligraphy in the mosque was covered up, prayer rugs discarded, and the mihrab (prayer niche) was walled up with bricks.

As for the Dome of the Rock a few hundred meters to the north, the Crusaders also planned to allocate the building for their own purposes. They were mostly ignorant of the history of the building. Some even believed that it was the original temple built by Solomon [Prophet Suleyman] in ancient times. In any case, they turned the building into a church known as the Temple of the Lord. Like in the al-Aqsa Mosque, the Islamic calligraphy was covered up and all signs of its Islamic past were erased. The rock under the dome was covered in marble and made into an altar for prayers.

Since Muslims were officially barred from entering the city, there were no congregational prayers in the mosque. There are limited examples of Muslim diplomats that came to Jerusalem who were allowed to pray there individually, but examples of this are few and far between.

Salah al-Din and the Mamluks
In the 1180s, the Kurdish sultan Salah al-Din al-Ayyubi managed to unite the various feuding Muslim states that surrounded Jerusalem. With his united Muslim army, he managed to liberate the city of Jerusalem from the Crusaders in 1187. Unlike the Crusaders 88 years earlier, Salah al-Din did not allow a massacre of civilians or soldiers. He did however, order the Crusaders out of the city and retook control of the Haram for Muslims. 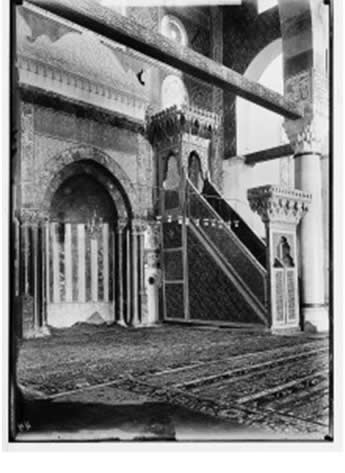 The minbar of Salah al-Din, before it was destroyed in 1967.

Salah al-Din vowed to clean up the al-Aqsa Mosque within a week of the city's liberation, in time for the next Friday prayer. Like the second caliph, 'Umar 550 years before him, Salah al-Din worked with his soldiers and followers to manually clean the mosque. The Crusader structures inside the mosque were torn down. The bathrooms and Crusader furniture were cleaned out of the mosque which was then sprinkled with rosewater by Salah al-Din personally. The mihrab was uncovered as was the Islamic calligraphy that had been covered up by the Crusaders. Salah al-Din even brought along a minbar (pulpit) that was constructed in Damascus in preparation for the liberation of Jerusalem. Besides just the mosque itself, Salah al-Din founded numerous educational institutes that took up residence inside the Haram, as he attempted to bring back the Islamic character of the city.

Despite a new Crusade that was launched in response to the Muslim conquest of the city, Salah al-Din was able to defend the city from Crusader attacks. After his death in 1193, the Ayyubid Dynasty of his descendants continued to rule over Jerusalem and take charge of its defense from Crusader attacks. In the late 1200s and early 1300s, the Ayyubid Dynasty gradually gave way to the new Mamluk Sultanate of Egypt, which was ruled by Turkish slave soldiers who would rise to power in Cairo.

During the Mamluk Sultanate, the European zeal for Crusading slowly abated, and Jerusalem was more secure from attack. Thus, the Mamluks were able to place much more emphasis on the construction of Islamic buildings in the city, particularly in and near the Haram. A new collonaded porch was constructed on the western side of the Haram, bordering the markets of the city. The Dome of the Rock itself was renovated and the numerous fountains and domes were built in the Haram for use by worshipers.

Numerous schools of Islamic law were built on the borders of the Haram. Scholars considered it a special blessing to be in the city, and to be able to study Islam with the al-Aqsa Mosque and Dome of the Rock within view was especially prized. Muslims from North Africa, Persia, and even as far away as India and China flocked to the mosque to study and worship. The great scholar of the 1300s, Ibn Taymiyyah even wrote a short treatise about the benefits of visiting the al-Aqsa Mosque and the correct etiquette and prayers to practice while there. 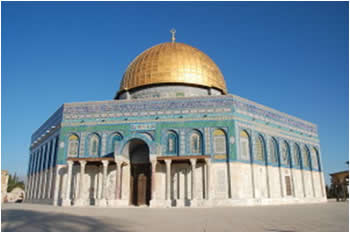 The Dome of the Rock was renovated by Sultan Suleyman in the 1500s. The tiles put in at that time still adorn its exterior.

According to Ibn Khaldun, empires are forever destined to rise and fall every few hundred years. And such was the case for the Mamluks. By the early 1500s, the new mega-power of the Muslim world was the Ottoman Empire, based in the historic city of Istanbul. In 1513, the Ottoman Sultan Selim I went to war against the Mamluks, and in 1516, he appeared outside the walls of Jerusalem with his Ottoman Turkish army and was given the keys to the city peacefully by its local government.

As part of the world's most powerful empire in the 1500s, Jerusalem experienced a new resurgence. It was made the capital of the sanjak of Jerusalem, an administrative district of the province of Syria. The Ottomans sent governors, soldiers, and administrators to the city to help manage it.

For the mosque, Ottoman control meant a new era of construction and beautification. Selim's son, Suleyman al-Kanuni, came to power in 1520. During his reign, the Dome of the Rock was completely renovated magnificentely. The exterior of the building was covered in marble, colored tiles, and calligraphy. Verses from the Quran's 36th chapter (SuratYasin) adorned the top of the walls which still can be seen today. Suleyman also commissioned a fountain near the main entrance of the al-Aqsa Mosque, which is still used by worshipers to do wudu (ritual purification). For the city itself, Suleyman ordered his head architect, Mimar Sinan, to rebuild the walls around the city, which also survive today.

The British and the Israelis
For centuries under Ottoman rule, Jerusalem and the al-Aqsa Mosque maintained a healthy status quo. While Muslims were in charge of the administration of the city, Jews and Christians were given religious freedom in accordance with Islamic law and the Ottoman millet. That balance was disrupted by the emergence of the Zionist movement in Europe, which sought to turn Jerusalem and the surrounding area into an exclusively Jewish state.

When their requests were denied by Sultan Abdülhamid II in the late 1800s, the Zionists turned to the British in WWI. The Ottomans had entered the war against the British in 1914, and the British rapidly advanced through the Sinai Peninsula and Palestine from 1915 to 1918. In 1917, the British captured the city of Jerusalem. For the first time since the Crusades, the city was in non-Muslim hands. However, unlike the Crusades, a massacre did not follow. The Muslim community of Jerusalem was allowed to continue to control the Haram area, although with British oversight.

A map of the Haram al-Sharif. Click for higher resolution.
For the Zionists, British control over Jerusalem meant increased Jewish immigration from Europe. Hundreds of thousands of Jews emigrated to Palestine, with many of them settling in Jerusalem. By the time the British pulled out of Palestine in 1948, the Zionists were able to establish a state called Israel and in the subsequent war, conquered a majority of Palestine. Half of Jerusalem, including the al-Aqsa Mosque and Dome of the Rock, however, escaped Israeli control. Instead, neighboring Jordan took control of East Jerusalem and the Haram.
On June 7th, 1967, the third day of the Six Day War, the Israeli troops managed to conquer Jerusalem, along with the rest of the West Bank, due to a massive troop withdrawal by the Jordanian government. Israeli troops entered the Haram with relative ease and flew an Israeli flag from the top of the Dome of the Rock. For Muslims, this was an epic catastrophe that marked a turning point in the history of the mosque. Adding to the tension, a large part of the al-Aqsa Mosque was damaged by a fire in 1967 that was started by an Australian extremist who hoped that the mosque's destruction would pave the way for the second coming of Jesus. Much of the ancient calligraphy was destroyed, along with the minbar of Salah al-Din.
With Israeli occupation of the city, any Muslim entrance into Jerusalem became strictly controlled. Even today, most Muslims not from Jerusalem itself are strictly prohibited from entering Jerusalem and praying in the al-Aqsa Mosque. A Muslim controlled waqf (religious endowment officially controls the Haram area itself, but entrance into the Haram is managed by Israeli police, who reserve the right to prohibit people from entering.