The Al-Aqsa Mosque Through the Ages: Part 1

When Prophet Muhammad ﷺ received the command from God to lead the Muslim community in five daily prayers, their prayers were directed towards the holy city of Jerusalem. For Muslims, the city of Jerusalem is an important site. As the home of numerous prophets of Islam such as Dawud (David), Sulayman (Solomon), and 'Isa (Jesus), the city was a symbol of Islam's past prophets. When Prophet Muhammad ﷺ made the miraculous Night Journey from Makkah to Jerusalem and the Ascent into Heaven that night (known as the Isra' wal-Mi'raj), it acquired an added importance as the place where the Prophet ﷺ led all the earlier prophets in prayer and then ascended to Heaven.
For Muslims, however, Jerusalem would remain a far-off symbol during the life of the Prophet ﷺ and the years immediately after his death. As Muslims came to control Iraq and then Syria in the 630s, however, Jerusalem would become a Muslim city, and the al-Aqsa Mosque in Jerusalem would become one of the most important pieces of land in the Muslim empire. Throughout the complex and war-torn history of this city, the Mosque has been a center-piece of the struggle for Jerusalem. With Muslims, Christians, and Jews all considering the land under the Mosque as especially holy, the importance of understanding the history of this land is of utmost importance.
Part 1 of this article will look at the history of the Mosque before the arrival of Prophet Muhammad ﷺ and the early Islamic period until the coming of the Crusaders in 1099. Part 2 will describe the al-Aqsa Mosque's history from the Crusades to the modern day.

Before and After Prophet Muhammad ﷺ
For Muslims, Islam was not a new religion in the 600s when Prophet Muhammad ﷺ began preaching in Makkah. Instead, it is seen as a continuation and capstone of the traditions of earlier prophets that are revered by all three monotheistic faiths. The message of Muhammad ﷺ only continues and perfects the messages of Ibrahim (Abraham), Musa (Moses), and 'Isa, which had been corrupted over time. Thus, for Muslims, the Temple of Solomon that was built Jerusalem's Temple Mount in ancient times was in fact part of their own religious history.

The Haram al-Sharif, with the Dome of the Rock in the center of the picture and the al-Aqsa Mosque on the left

With this mindset, when Muslims conquered the city of Jerusalem in 637 during the caliphate of 'Umar ibn al-Khattab, they sought to resurrect Jerusalem as a place of worship. The ancient temple of Jerusalem had been rebuilt numerous times, most recently by Herod around 20 BCE. By 70 CE, however, the Romans destroyed the temple after a Jewish revolt in Palestine. Jews were forbidden from entering the city and Judaism all but died in Jerusalem.
The area where the temple stood remained as a wasteland for the next few hundred years. The Romans used the area as a garbage dump, so when 'Umar entered the city and went to see where his religious forefathers such as Dawud and Sulayman had worshiped (which was also the place where Muhammad ﷺ had worshiped during the Isra' wal-Mi'raj) he found a the area filthy and unusable as a mosque. Nevertheless, he decided to clean the area and built the al-Aqsa Mosque. As was his custom, he worked alongside average Muslims in cleaning and purifying the area. They erected a basic mosque that could fit about 3000 people at the southern end of the Temple Mount, now known by the Muslims as the Haram al-Sharif, the Noble Sanctuary. A contemporary Christian pilgrim described the mosque as a large wooden structure built upon earlier ruins.
For the Muslims, they did not see this as trampling on the holy sites of other religions. Since the same prophets that are mentioned in the Old Testament of the Bible are accepted as Muslim prophets, the new mosque was seen as a continuation of those earlier places of worship. This went in line with one of the central themes of Islam – that it was the perfection of earlier monotheistic faiths.

The Haram al-Sharif
For decades, this simple structure built by 'Umar remained the main building on the Haram. In 690, however, the caliph 'Abd al-Malik of the Umayyad Dynasty rebuilt the al-Aqsa Mosque, much larger and more stable than the mosque that 'Umar had built. The basic plan of the current mosque dates from this reconstruction. 'Abd al-Malik's real architectural achievement however, was what was constructed about 200 meters to the north. 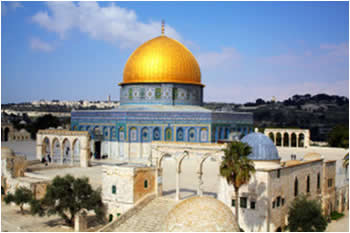 Above the rock from which some Muslims believed Prophet Muhammad ﷺ ascended to Heaven from, 'Abd al-Malik built the magnificent Dome of the Rock. As part of the al-Aqsa Mosque, it was not a separate house of worship, nor was it meant to compete with the al-Aqsa Mosque, but was meant as a complement to it. Using the architectural traditions and mosaics that the Umayyads had learned from the Byzantines who ruled the area before them, the Dome immediately became one of the focal points of Islamic architecture in the 600s.
The Dome of the Rock was built at the very summit of the Haram complex, and is thus one of the most impressive and notable buildings of the city. It has an octagonal footprint, from which rises a 20 meter dome that was originally covered in lead sheets. Calligraphy adorned both the inside and outside of the building, with some of the oldest existing Quranic inscriptions being inside the dome of the building. Given the magnificence of the building, some modern historians have argued that 'Abd al-Malik intended the building to be a rival to the Ka'bah in Makkah. Had he intended to do so, Muslim scholars of the time would have no doubt expressed outrage and recorded his blasphemous intentions in books written during that time. However, there exists no contemporary account of him having such an intention, and the earliest mention of this idea was written 200 years later, by someone with a strong anti-Umayyad bias.
After the fall of the Umayyads in 750, Jerusalem came under the control of the 'Abbasid Dynasty. The new 'Abbasid caliphs had their capital in the Iraqi city of Baghdad, and did not put as much emphasis on Jerusalem as the Umayyads had. As such, the Haram did not receive the attention and money it had during the Umayyad period. Nevertheless, despite the neglect it received from the caliphs, Jerusalem continued to be an important place of pilgrimage, and the al-Aqsa Mosque itself remained as the center of Islamic life in the city from the 600s through the 900s, despite many earthquakes during this period which required numerous renovations.

Decline Under the Fatimids
Jerusalem and the Haram al-Sharif began a tumultuous few centuries in the late 900s. The Fatimid Empire, which was based in Egypt, took control of Jerusalem in 970, after defeating 'Abbasid troops in nearby Ramla. The Fatimids belonged to the Ismaili sect of Shi'ism, which many Islamic scholars historically have classified as outside of the fold of Islam itself. Periods of Fatimid rule had catastrophic repercussions for the al-Aqsa Mosque.

The interior of the Aqsa Mosque. The area near the mihrab (distant) dates to the Umayyad construction, while the pillars date to the Fatimid period.

Since the beginning of Muslim rule over Jerusalem, the mosque and the Haram in general had been centers of Islamic knowledge. Scholars regularly established schools in the mosque to educate students from the basics of Arabic grammar to advanced topics in Islamic law and theology. During the Fatimid period, these educational endeavors were curtailed by the Fatimid governors and replaced with official Shi'a establishments. The geographer al-Muqaddasi wrote in 985 that in Jerusalem, "jurists remain unvisited, pious men have no renown, and the schools are unattended for there are no lectures."1 He goes on to lament the lack of Islamic education in the city that had been frequented by scholars such as al-Shafi'i in the past.
The worst period of Fatimid rule ended up being the reign of al-Hakim, which began in 996. He went far beyond previous Fatimid rulers in his oppression of orthodox Islam. He declared himself divine, demanding that his name replace the name of God in Friday sermons, outlawed the Muslim fast of Ramadan, and prevented Muslims from going to Makkah for pilgrimage. By the end of his rule in 1021, the city of Jerusalem had all but lost its status as a center of Islamic scholarship. Beyond that, he also oppressed Christians and Jews in Jerusalem, and destroyed the Church of the Holy Sepulchre, in direct conflict with Islamic law and the promises of 'Umar in 637.
After the disastrous reign of al-Hakim came some more moderate Fatimid leaders, who were more accommodating the mosque itself and its Islamic history. In the 1030s, after a disastrous earthquake, the al-Aqsa Mosque was renovated by the Fatimids. The resulting structure had a central nave and 7 grand arches on its facade that supported the massive roof. This was down from the massive 14 arches that were originally built by the Umayyads. Today's mosque is more or less unchanged from the Fatimid construction. 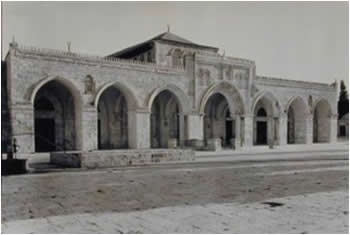 The facade of the Aqsa Mosque

In 1073, Jerusalem was conquered by the Seljuk Turks, who were recent converts to mainstream Sunni Islam from Central Asia. From an Islamic perspective, al-Aqsa was now back in the capable hands of a powerful Sunni state, which brought back Islamic scholarship to the city. Schools were established in the Haram area teaching the Shafi'i and Hanafi schools of Islamic law, and intellectual life in the city began to flourish again. Scholars began to emigrate to the city to learn as well as to teach from across the Muslim world. Notably, Abu Hamid al-Ghazali moved to the city in 1095. He lived in the Haram along the eastern wall of the city, and spent the next few years in prayer and seclusion in the Dome of the Rock and the al-Aqsa Mosque. During this time, he wrote the incredibly influential The Revival of the Religious Sciences, which revolutionized the way Muslims approached topics such as spirituality, philosophy, and Sufism.
The revival of intellectual Muslim life around the al-Aqsa Mosque would not last, however. The Haram's Islamic nature itself would soon be erased in 1099 with the coming of the Crusaders, as we will see in Part 2 of this article.