If you look at a map of the modern Arab world, it may look confusing. Political boundaries between countries may seem arbitrary, nonsensical, or simply odd. In some places you see straight lines through the desert dividing two countries. In other cases, wavy and haphazard lines separate nations. Where did these lines in the sand come from?

In the case of Lebanon, the lines that separate Lebanon from neighboring countries are relatively recent. A civil war between two groups in the area led to a European intervention in 1860 that drew up the lines, separating Lebanon from the surrounding areas it has historically been united with.

Lebanon Under The Ottomans

In 1517, the Ottoman Empire conquered most of Arab Western Asia from the Mamluk Sultanate. Sultan Selim decided to organize the region comprising modern-day Syria, Lebanon, Palestine, and Jordan into a district called Eyalet Sham (إيالة شام in Ottoman Turkish), which roughly translates to the “Province of Syria”. The province was further divided into administrative subdivisions called sanjaks.

From the 1600s to the 1800s, the region was reorganized numerous times. At times, parts of modern Lebanon would be organized under districts governed from Damascus, Beirut, Tripoli, or Jerusalem.

Ottoman control was generally restricted to the cities, however. In the mountains and rural areas of Lebanon, the Ottomans gave semi-autonomous rule to the local Druze and Christian communities, usually under the Ma’an or Shihab families. Throughout the Ottoman Empire, many rural parts stayed under local control, with local authorities acting as tax collectors for the Ottoman authorities. The same held true in Lebanon. Although the Ottomans maintained nominal authority, the local families were given freedom to rule as they pleased as long as they recognized Ottoman authority.

Maronite Christians and the Druze

The system that the Ottomans had been ruling Lebanon through generally worked with little conflict. However, in the 1800s, religious conflict between the Maronite Christians and the Druze began to boil over.

The Maronites are a Catholic religious group that owes their allegiance to the Pope in Rome. They had existed in Syria since before the Muslim conquest in the 600s. They are living proof of the policy of religious tolerance that Islam has exercised for the past 1400 years, as they have always been given religious freedom without being hassled by Muslim authorities.

A Maronite monk in Lebanon

The Druze are a unique religious group. They emerged in the 1000s as an offshoot of the extremist Shia group, the Ismaili Fatmids. Although borrowing numerous ideas from mainstream Islam, Christianity, and Judaism, the Druze insist on being their own religious group, separate from any others.

In the 1840s, conflict between the Druze and the Maronites began to become a problem in the coastal region of Syria, where the two groups consisted a majority of the population. In order to attempt to solve the problem, the Ottoman authorities decided to divide the region into two administrative districts in 1842. The northern district was governed by the Maronites and the southern one by the Druze.

The French and the British at this time were seeking to increase their influence in the Muslim world, while still competing with each other. As a result, the French tended to support the Maronites (their Catholic brethren in any case) and the British supported the Druze. With international backing, the two groups escalated their violence. In the summer of 1860, over 10,000 Maronite Christians were massacred by the Druze in Damascus. 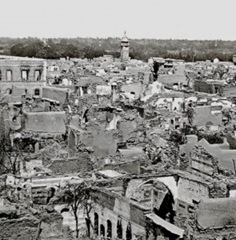 The Christian Quarter of Damascus after the Druze massacres in 1860

Muslims in Syria generally stayed neutral and aided many of the Christians who were seeking to escape massacred. Abd al-Qadir, a Muslim Algerian scholar living in exile in Damascus was particularly noteworthy with his support of the Christians in Damascus. His efforts to save them from Druze paramilitaries was met with recognition by the French and American governments.

In any case, the Ottoman authorities were able to suppress the violence between the two sides within a few months of the outbreak of the war. The Ottomans then reestablished direct control over the area to prevent further violence from happening. Regardless of the success of the Ottomans in stopping the violence, the French took the opportunity to intervene.

The major European powers of the day (Austria, Great Britain, Prussia, and Russia) all granted France the authority to send troops to Lebanon to protect the Maronite Christians, despite the ceasing of violence there. The French soon imposed a treaty on the Ottoman sultan Abdülmecid I in 1861. This treaty forced the Ottomans to appoint a non-Lebanese Christian governor for the region that would be approved by the great powers of Europe.

Nationalistic Effects of the Treaty

The treaty that the French imposed on the Ottomans effectively created an independent French colony called Lebanon in the middle of the Muslim world. Although the Ottomans officially retained control over the area until 1918, the French exercised great influence in the new country. In the treaty, the French dictated the borders of modern Lebanon to the Ottomans. The borders were meant to only surround the Christian areas, creating a Christian-majority country in the midst of the Muslim world that the French could use to exercise their power in Syria. 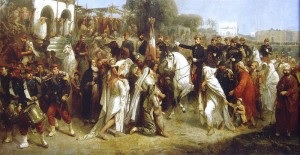 French troops arriving in Beirut in 1860

The treaty created the first political separation of Lebanon from the rest of Syria since the beginning of Islamic rule there in the 600s. Whereas historically modern-day Lebanon had been considered as a part of “Greater Syria”, now it was considered its own country with its own national identity centered around Christian nationalism and European ideas. Ethnically, culturally, and religiously, Syria (including Lebanon, Palestine, and Jordan) had always been considered a unified region.

The French creation of Lebanon began the process of breaking apart the Muslim lands into independent disunited states. Much emphasis was placed onnationalism as a unifying force instead of religious or cultural similarities. As a result, the people of Lebanon began to see themselves as inherently different and separate from the people throughout the rest of Syria – a mentality that continues today throughout the Arab world. This European policy of promoting nationalism to decrease Islamic or Arab unity has been greatly successful for them.

Today, the Muslim world remains completely disunited with arbitrary lines in the sand drawn by European powers to keep people separated and thus increase European and “Western” influence in the region. Without the unity shown in earlier Muslim eras, the great successes and power of the Muslim world cannot be regained.