From the 1500s through the 1800s, European nations were engaged in a tragic and barbaric practice known as the slave trade. During this period, over 12 million Africans were boarded onto ships and taken to North and South America to work as slaves. The legacy of this inhumane treatment lives on today, in the form of racism and economic disadvantage for blacks in the Americas, and disunity and war in Africa. One aspect of slavery that has been overlooked in historical studies is the impact of slave revolts. Needless to say, the African slaves did not go willingly to their new lives. In many cases, they fought back against their masters, refusing to accept the life they’d been thrown into.

One of the most notable (and successful) of these rebellions was the Bahia Revolt, which took place in 1835 in Brazil. This revolt, unlike some others, was planned and led entirely by Muslims. The story of how they were able to plan a revolt in such horrid conditions and have such a large impact is remarkable. The most interesting and defining factor of the revolt was its Islamic character.

Brazil was originally a Portuguese colony, up until 1822 when it gained its independence. Regardless of the government, however, the slave trade went on from the earliest Portuguese settlements through the late 1800s. In the eastern state of Bahia, slaves made up about one third of the labor force. Understanding the origin of these slaves is very important to understanding how the revolt was so successful. Most of the slaves came either from Senegambia (on the western coast of Africa), or from the Bight of Benin (modern-day Benin, Togo, and Nigeria). The slaves from these areas were almost entirely Muslim. The Wolof and Mandinke people of Senegambia were entirely Muslim by the 1400s and were very learned in Islamic matters, with many scholars among them. The Yoruba, Nupe, and Hausa people from Benin were also entirely Muslim since at least the 1500s.

The location of the revolt, Salvador, in Brazil

When these Muslim slaves arrived in Brazil, they carried with them their religious beliefs, with most refusing to submit to Catholicism like their Portuguese and Brazilian masters. Even as slaves they managed to carry on an Islamic community with imams (scholars), mosques, schools, and communal prayer. In the capital of Bahia, Salvador, where the revolt would take place, over 20 different mosques existed, being built by both Muslim slaves, and freedmen (former slaves who had gained freedom).

In 1814 and 1816, the Muslims of Bahia attempted to organize a revolt against the Portuguese. They wanted to overthrow the local law enforcement, free all the slaves, and commandeer ships back to Africa. Unfortunately, some slaves were serving as informants to the local police, and the revolt was crushed before it even started, with its leaders being killed. Over the next 20 years, intermittent minor revolts by Muslims and non-Muslims alike were met with no success in bringing freedom to Bahia’s slaves.

Before discussing the revolt in 1835, we must understand the unifying factor Islam played in the organization of the slaves. The Wolof, Mandinke, Hausa, Nupe, and Yoruba all spoke different languages. While some people have ignorant ideas about Africa being one monolithic entity, it is a diverse continent of different people, cultures, and nations. These Muslim slaves in Bahia were as diverse as a group of French, German, Russian, and Greek speakers. Despite their ethnic differences, the unifying factor between all of them was Islam. Islam provided them with a common language to speak (Arabic), common customs, dietary habits, and behaviors. The Muslims of Bahia would be much more connected to fellow Muslims of a different ethnicity than non-Muslims who spoke the same language as them. Throughout Islamic history, unity such as this has led to greater strength and solidarity. 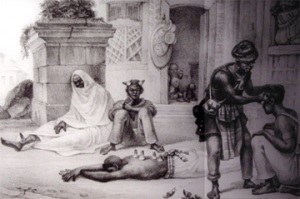 The failed revolts of 1814 and 1816 forced Bahia’s Muslims to go into hiding. Outward expressions of Islam were repressed by the authorities. Despite this, throughout the 1820s and 1830s, the Muslim leaders and scholars focused greatly on converting other Africans (be they Catholic or animist) to Islam. Even the Brazilian authorities noticed an increase in the number of people practicing Islam, but did not pay it much attention.

The people who organized the revolt were exclusively Muslim scholars. Due to the strength of the Muslim community, they were well respected by the people and held in a position of honor and esteem. Among these leaders were men such as:

Shaykh Dandara – a wealthy freedman who was an imam

These Muslim scholars, as well as many others, used the mosques as a base of operations. There they discussed plans for revolt, stored weapons, and educated the local Africans. It was through these mosques that Malam Bubakar distributed his call to jihaad (holy struggle, or military resistance). He wrote out a document in Arabic that called on Muslims to unify in preparation for the coming revolt against their Brazilian masters.

The authorities had received some information that a rebellion was brewing, so they took proactive steps and exiled Malam Bubakar 6 months before the revolt was scheduled. Despite this, the plans for the revolt were already finalized and distributed to Muslims throughout Bahia. 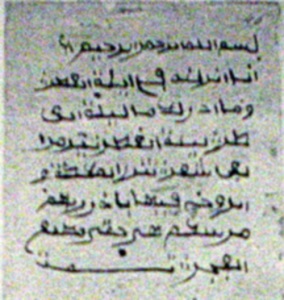 A copy of Surat al-Qadr from the Quran. It belonged to one of the revolting Muslim slaves of Bahia and is written in a traditional West African style of Arabic.

The revolt was to take place after the fajr (dawn) prayer on January 25th, 1835, which was the 27th of Ramadan, 1250 in the Muslim calendar. Some Muslims consider the 27th to be the most probable date for Laylat al-Qadr, the Night of Power, when the Quran was revealed to Prophet Muhammad ﷺ. The Muslims of Bahia chose this date in the hopes that the heightened spiritual state of the community would lead to greater chances for success.

Because of the massive size of the planned revolt, word was bound to reach the Bahia police about the revolt. The night before the revolt was scheduled to take place, they raided one of the local mosques and found Muslims armed with swords and other weapons. The fight that ensued led to the death of one officer. Thus, the revolt had to start early.

Albeit a few hours early, the Muslim revolutionaries from this mosque marched out of the mosque, ready to begin the revolt in the dead of night. They were dressed in long white thobes (tunics) and kufis (skullcaps) that clearly identified them as Muslims. Because the revolt was scheduled to begin at dawn, not all the mosques came out in revolt at the same time. Regardless, those that did start the revolt around midnight marched throughout the streets of Salvador, gathering other slaves (both Muslim and non-Muslim) to join them in their revolt. Before the rest of the mosques even joined, there were about 300 slaves and freedmen marching through the city.

Eventually, the governor of Bahia managed to mobilize the local armed forces to confront the rebels. The few hundred Africans now met over 1,000 professional soldiers with advanced weaponry in the streets of Salvador. The battle lasted for about an hour, and led to the death of over 100 Africans and 14 Brazilian soldiers. The Brazilian authorities clearly won the battle. The revolt never managed to overthrow the local government, nor to board ships headed back to Africa. It appeared to be a failure.

The leaders of the revolt, the Muslim scholars, were put on trial and killed. The numerous slaves who took part in the revolt were given punishments ranging from imprisonment to lashings. Although on the surface the revolt appears to be a failure, there is more to it than that.

After the revolt, a general fear of Africans, particularly Muslims, gripped the people of Brazil. The Brazilian government passed laws that led to a mass deportation of Africans back to Africa. One of the original goals of the Bahia Revolt was to be returned to Africa, so this can be seen as a partial victory for the rebellion.

More importantly, however, the Bahia Revolt spurred the anti-slavery movement throughout Brazil. Although slavery continued to exist in Brazil until 1888, the revolt began the public discussion about the role of slaves and the benefit or detriment they provided to Brazilian society. It is seen as one of the most important events in leading towards freedom for Brazilian slaves.

It is important to note that the single defining factor for the Bahia Revolt was its Islamic character. It was organized and led by Muslim scholars, planned in Muslim mosques, and supported by a largely Muslim African population. Without Islam as a unifying factor, such a revolt never would have been possible, nor would the effect it had have been so great.

Furthermore, Islam continued as a strong force in Brazil for decades. The violent Brazilian reaction to oppress Islam in the aftermath of the revolt did nothing to stamp out Islam. It is estimated that in 1910, there were still over 100,000 Muslims throughout Brazil. This is a testament to the strength of the Muslim community of Brazil and their dedication to Islam.

Any discussion on the history of Islam in the Western Hemisphere must include the heroic actions of these Muslims. Islam is not a new religion in North and South America, brought by recent immigrants from the Middle East and South Asia, as many tend to believe. Rather, it is a religion that has greatly influenced the course of North and South American history in the past, and will continue to do so in the future.