In 711, Islam made its entrance into the Iberian Peninsula. Having been invited to end the tyrannical rule of King Roderick, Muslim armies under the leadership of Tariq ibn Ziyad crossed the straits between Morocco and Spain. Within seven years, most of the Iberian Peninsula (modern Spain and Portugal) was under Muslim control. Parts of this land would remain Muslim for over 700 years.

By the mid 900s, Islam had reached its zenith in the land known as al-Andalus. Over 5 million Muslims lived there, making up over 80% of the population. A strong, united Umayyad caliphate ruled the land and was by far the most advanced and stable society in Europe. The capital, Cordoba, attracted those seeking education from all over the Muslim world and Europe. However, this golden age of politics and society would not last forever. In the 1000s, the caliphate broke up and divided into numerous small states called taifas. The Muslim taifas were disunited and susceptible to invasion from Christian kingdoms in the north. For the next 200 years, the taifas fell one by one to the Christian “Reconquista”. By the 1240s, one kingdom remained in the south: Granada. This article will analyze the fall of this final Muslim kingdom in Iberia. 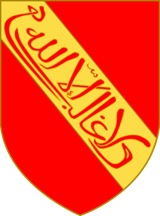 The seal of the Emirate of Granada, declaring “There is no victor except for Allah”

During the Reconquista, Muslim states fell one by one to Christian kingdoms invading from the North. The major cities of Cordoba, Seville, and Toledo fell from the 1000s to the 1200s. The Murabitun and Muwwahidun (Almoravid and Almohad) movements from North Africa helped slow the Christian tide, but disunity among the Muslims eventually led to continued loss of land.

One Muslim state – Granada – was able to escape conquest by Christians in the 1200s. After the fall of Cordoba in 1236, the rulers of the Emirate of Granada signed a special agreement with the Kingdom of Castile, one of the most powerful Christian kingdoms. Granada had agreed to become a tributary state to Castile. This meant they were allowed to remain independent as the Emirate of Granada, but in exchange for not being invaded by Castile, they had to pay a yearly sum (usually in gold) to the Castilian monarchy. This created a detrimental situation for the Muslims of Granada as they paid regularly to strengthen their enemies.

Despite this, one of the reasons Granada was able to maintain its independence was its geography. It lies high in the Sierra Nevada Mountains of Southern Spain. The mountains created a natural barrier for any invading armies. Thus, despite being militarily weaker than Castile, the mountainous terrain provided a huge defensive advantage.

For over 250 years, Granada remained as a tributary state to the stronger Kingdom of Castile. But surrounded by unfriendly Christian nations, Granada was constantly at risk of being exterminated. In the early 1400s, a Muslim scholar wrote of al-Andalus’ last kingdom, “Is Granada not enclosed between a violent sea and an enemy terrible in arms, both of which press on its people day and night?”

The impetus for the conquest of Granada occurred in 1469, when King Ferdinand of Aragon of Queen Isabella of Castile married. This united the two most powerful Christian kingdoms of the Iberian Peninsula. With a united front, now the Christians set their sights on removing the last Muslim state from the peninsula. 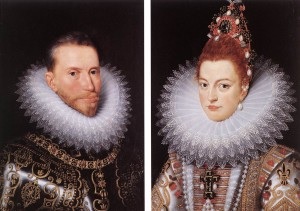 In 1482, war began between the new Kingdom of Spain and the Emirate of Granada. Despite being in a much weaker position, the Granadans fought valiantly. One Spanish chronicler expressed his respect for the Muslim soldiers, “the Moors [Muslims] put all their strength and all their heart into the combat, as a courageous man is bound to do when defending his life, his wife, and his children.” The ordinary Muslim civilians and soldiers were fighting for their existence and the survival of Islam in al-Andalus, and fought very bravely. The Muslim rulers, on the other hand, were not as chivalrous or brave.

Throughout the war, the Christians remained unified and did not break up into separate warring factions, as they had commonly in the past. In contrast, Granada experienced huge political upheaval. Muslim leaders and governors were commonly at odds and scheming different plans to undermine each other. Many of them were even secretly working with the Christian kingdoms in exchange for wealth, land, and power. Worse than all of that, in 1483, one year into the war, the sultan’s son, Muhammad, rebelled against his father and sparked a civil war in Granada, just as Spanish forces began to attack from outside.

King Ferdinand planned to use the civil war to his advantage. He supported Muhammad in his fight against his father (and later, his uncle) in an effort to weaken Granada as a whole. Muhammad was supported with arms and soldiers by Ferdinand in the fight against other members of his family, and thus was able to take power over Granada. Throughout this armed struggle, Christian armies slowly pressed further into Granadian lands, so that by the time Muhammad took power in 1490, he only ruled the city of Granada and nothing of the surrounding countryside.

Muhammad decided to resist the Christians militarily and sought help from other Muslim kingdoms throughout North Africa and the Middle East. No help came besides a small Ottoman navy that raided the Spanish coast and did not cause much damage. By the end of 1491, the city of Granada was surrounded by Ferdinand and Isabella’s army. From the towers of his palace, Alhambra, Muhammad could see the huge Christian armies assembling and preparing to conquer the city. With this depressing future in sight, Muhammad was forced to sign a treaty which gave over control of the city in November 1491. 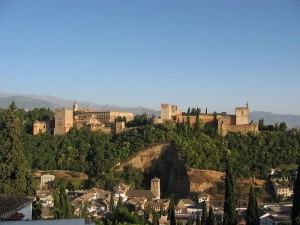 Christian banners and crosses were hung from the Alhambra on January 2nd, 1492

On January 2nd, 1492, the treaty took effect and the Spanish army entered Granada and officially took possession of the last Muslim state of al-Andalus. Christian soldiers occupied the legendary Alhambra palace that morning. They hung the banners and flags of Spain’s Christian monarchs from the walls, signifying their victory. At the top of Alhambra’s tallest tower, they erected a giant silver cross, telling the terrified people of Granada below that the forces of Christendom had been victorious over the Muslims of al-Andalus. Muslims were too fearful to venture outdoors, and the streets were deserted.

Sultan Muhammad was exiled, and on his way out of Granada, he stopped at a mountain pass to look back at Granada and began to cry. His mother was unimpressed with his sudden remorse and scolded him, “Do not cry like a woman for that which you could not defend as a man.”

Although the victorious Christians promised religious freedom and generally favorable terms to the people of Granada, these promises were soon broken. In 1502, Islam was officially outlawed in Granada and hundreds of thousands of Muslims had to either immigrate to North Africa or hide their beliefs. By the early 1600s, not a single Muslim was left in all of Spain.

The story of al-Andalus’ decline from one of the Muslim world’s leading political and social powers in the 1000s to a rump state that was conquered in the late 1400s is one that has no match in Islamic history.  The constant infighting among Muslims, the lack of support from other Muslim empires, and the focus on personal power instead of Islamic unity all led to this downfall. And with the loss of Granada in 1492, that story ended.