A Gold Mine in the Desert – The Story of Mali

Today, Mali is known as one of the poorest countries on earth. Life expectancy and literacy rates are dangerously low. A violent rebellion by the ethnic Tauregs in the North of the country that is threatening to split the country in half has been one of the few things that brought Mali to the news lately. But life in Mali has not always been this negative and depressing. Once, Mali was the shining example of a successful Muslim state. It was the envy of people around the world. It truly was a gold mine in the desert.

The region known as Mali is located in the southern extremities of the Sahara Desert. Here there is a transitional region between the arid and barren deserts to the North and the rain forests along the coast to the south. This is known as the Sahel. What Mali lacks in fertile land, it more than made up for with valuable resources. Gold and salt mines have been the epicenter of Mali’s economy for hundreds of years. Trade routes extended north from Mali to the North African coast, where wealthy traders would pay high prices for the gold and salt to send to Europe and Southwest Asia. These trade routes made the Mandinka (the main ethnic group of West Africa) incredibly wealthy.

Goods were not the only thing traded through these routes. Ideas flowed from north to south. Muslim traders carried Islam with them along with the gold and salt. From the 700s onward, Islam slowly began to take root among the people of the West African Sahel. At first, the response of the non-Muslim states of West Africa was to suppress Islam or at least separate Muslims from the general population. However, as more and more people began to accept Islam, Muslim states started to emerge.

One Muslim state, Mali, was founded by an obscure figure called Sundiata Keita. The epic legend of his life has traveled down throughout the centuries as an oral story, and thus the truth of his story has been distorted over time (in one anecdote, he single-handedly uprooted a fully grown tree, and replanted it in his mother’s yard). What we do know is that he founded the Mali Empire and created a role for the emerging Muslim population of West Africa in the 1230s. He took the title of “Mansa”, the Mandinka word for king.

Mansa Musa and His Hajj

The tenth mansa of Mali was Musa I, who ruled from 1312 to 1377. He came to power when his brother, Mansa Abu Bakr, led an expedition across the Atlantic Ocean to discover the Americas, leaving Musa the throne. Much of what we know about Musa’s reign comes from the epic story of his Hajj, in 1324. A depiction of Mansa Musa from a European atlas.

As a devout Muslim, Mansa Musa insisted on completing the fifth pillar of Islam, the Hajj to Makkah. The geographic remoteness of Mali made the journey very difficult and impossible for most people, even in today’s world of modern transportation. Nevertheless, in 1324 Musa set out from Mali with an entourage of 60,000 people.

Since his empire was one of the richest in the world, the caravan of travelers must have made quite an impression to everyone they passed. 12,000 servants accompanied him, each wearing valuable silks and carrying a 4 pound bar of gold. 80 camels carried between 50 and 300 pounds of gold dust each, which was given to the poor along the route. Exotic animals and people from all walks of life helped make this journey an epic one that left an impression on all who saw it. Numerous accounts from different regions all attest to the grandeur of this procession.

Mansa Musa made a stop in Egypt on his way to Makkah. While there, he initially refused to meet the Mamluk sultan of Egypt because the tradition was to bow to the sultan. Musa insisted he only bows down to Allah. He made quite an impression on the Mamluk government, as officials noted that he knew the Quran and was very particular about praying on time. Musa was clearly a very devout Muslim.

While in Egypt, Musa’s incredible amount of wealth led to some unintended consequences. He gave out gold gifts to members of the government, the poor, scholars, and many others. Due to the laws of supply and demand, the price of gold in Egypt plummeted, effectively crippling the economy. Even a decade later, during Ibn Battuta’s visit to Cairo, he noted that the economy still hadn’t completely recovered from Mansa Musa’s visit. The effect that Mansa Musa’s visit had on Egypt clearly shows the wealth and importance of the Mali Empire, even when it encountered far-off lands.

On his way back to his homeland after the Hajj, Mansa Musa insisted on bringing the smartest and most talent Muslims to his kingdom. With his immense wealth, he paid scholars, artists, teachers, architects, and people from all professions to come to Mali and contribute to the growth of Islam there. Great people were brought to Mali from Egypt, Syria, Iraq, al-Andalus, and the Hejaz. 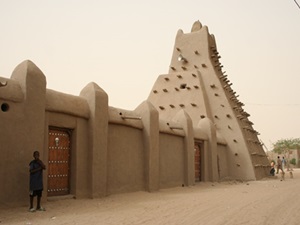 The Sankore Masjid and University in Timbuktu, showing the distinctive architectural style of Mali

The effect this had on Mali was immense. Architecturally, the buildings in Mali began to show a mix of Spanish, Arab, and Persian design. This unique blend of cultures created a distinctly West African style that is still seen in its architecture. The legendary city of Timbuktu was especially blessed by Mansa Musa’s Hajj, with many mosques such as the Sankore Masjid being built by the best architects in the world. Mansa Musa even paid the Andalusian architect Ibn Ishaq 200 kilograms of gold to build the Sankore Mosque in Timbuktu. Being able to pay for the best architects, scholars, and teachers made Mali, and Timbuktu in general a center of Islamic knowledge.

A Center of Knowledge

The most significant impact Musa’s Hajj had on Mali was its subsequent growth as a center of knowledge. With the best scholars from all over the Muslim world, Mali developed one of the richest educational traditions of the world at that time. Libraries were all over cities such as Gao and Timbuktu. Public and private collections had thousands of books on topics from Islamic fiqh, to astronomy, to language, to history. Great universities attracted talented students from all over Africa to come study in this center of knowledge.

This tradition of knowledge lasts until today in Mali. Families still hold on to private library collections that number in the hundreds of books, many of them hundreds of years old. The people of Mali are fiercely protective of their knowledge that has been passed down from the time of Mansa Musa, making it very difficult for outsiders to access these great libraries. Manuscript from Timbuktu about astronomy and mathematics

These manuscripts today are threatened by the desertification of the Sahel, where the environment threatens to turn these great books into dust. Political problems in West Africa also threaten to destroy the remaining manuscripts. Efforts are underway to preserve these great libraries by digitizing them. The Timbuktu Educational Foundation is leading efforts to scan individual pages before they are lost to history. You can find (and read) many of these manuscripts online.

As Mali became a center of knowledge in West Africa, Islam ingrained itself deeply in the lives of it’s people. It was common for “everyday people” to be very well educated in religious and and secular matters. The effects of this knowledge on society is seen in Ibn Battuta’s trip to Mali in the 1350s, when he remarked that if a man wanted to have a seat in the masjid during the Friday prayer, he would have to send his son hours early to reserve a spot for him, as the masjids would be filled to the brim early in the morning.

The importance of Mali and its contributions to the world cannot be overstated. In it’s history, it was one of the centers of Islamic knowledge and wealth. It’s importance to the world decreased throughout the 16th-18th centuries until it was colonized by the French in the 1800s. This history is not lost forever, however. It lives on in the continuing experience of West Africa’s Muslims, and the legacy it left on the rest of the world.