1258-The Mongol Invasion and the Destruction of Baghdad

The 1200s started out looking good for the Islamic world. The Crusaders had been defeated and Jerusalem liberated in 1187, the Ismaili Fatimids had finally been removed from harassing the Muslim world in the mid-1100s, and a powerful Khwarazmian Empire had emerged in Persia. However, all that would soon turn around when the ruthless Mongols would make their way into Southwest Asia. The destruction and devastation they left in their path has scarcely been seen anywhere else in history.

Who Are The Mongols?
The Mongols were a tribe of nomads from Central/North Asia. They lived on the steppe of that region, relying on a nomadic lifestyle of constant movement as a way of life. They were forever dependent on and attached to their horses, which was their main mode of transportation. Religiously, they were polytheistic animists. They never established a large, organized empire, and instead stayed as a loose coalition of tribes north of China.

Throughout history, they were usually at war with their neighbors. China to the south in fact built the Great Wall of China during the reign of Emperor Shi Huang (247-221 BC) as a means to keep the Mongols and others away from their villages. The Mongols also feuded with other tribal groups in Central Asia such as Turkic tribes and the Tatars.

Genghis Khan
Mongolian (and world) history changed forever during the rule of Genghis Khan. He was a tribal chief for the Mongols from 1206-1227. During his reign, he managed to unite the many Mongol tribes along with numerous Turkic tribes as well. With a large, unified group, he set about conquering any and all land the Mongol horsemen could reach.

He conquered most of Northern China in the 1210s. In doing so, he destroyed the Xia and Jin dynasties, as well as conquered Beijing. He also managed to conquer most of the Turkic tribes of Central Asia, leading all the way into Persia. This led him to send armies into Eastern Europe as well, attacking Russian lands and even the borders of Central Europe's German states. 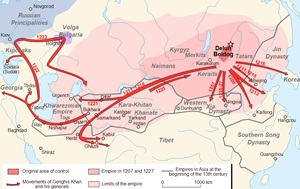 By the 1220s, Genghis Khan's armies had ravaged much of Asia and even Europe

More important than what Genghis Khan conquered was how he conquered. He deliberately used terror as a weapon of war. If a city he was besieging gave up without a fight, its people would usually be spared but would have to go under Mongol control. If the city fought against the Mongols, everyone, including civilians, would be massacred. This reign of terror is a large part of why he was such a successful conqueror. People were more willing to give up than to suffer massacres at his hand. For example, when he besieged the city of Herat, in present-day Afghanistan, he killed over 1,600,000 people.

The Invasion of the Muslim World
Besides some raids and massacres on the borderlands of Islam, Genghis Khan did not invade far into the Muslim world. Under his successor, Ogedei, the Muslim world continued to be spared Mongol wrath. However, in 1255 that peace would end. The Great Khan, Mongke, put his brother Hulagu Khan in charge of an army whose goals were to conquer Persia, Syria, and Egypt, as well as to destroy the Abbasid Caliphate. The campaign's goal appears to be a complete destruction of Islam. Hulagu himself even had a very deep hatred for everything attached to Islam. Much of this came from his Buddhist and Christian advisors who influenced his policies.

The Muslim world at this time was in no position to resist the Mongol attacks. The Abbasid Caliphate was nothing but a shell of its former self, having no power outside of Baghdad. Most of Persia was disunited as the Khwarazmian Empire had mostly deteriorated by then. The Ayyubid state established by Salah al-Din was only in control of small parts of Iraq and Syria. In Egypt, a recent revolution had overthrown Salah al-Din's descendants and brought to power the new Mamluk Sultanate. With his giant army of hundreds of thousands, Hulagu did not encounter much resistance.

The Destruction of Baghdad
Baghdad had been established in 762 by the Abbasid Caliph al-Mansur. Throughout its history, it had been the capital of the Muslims, as well as the world in general. The libraries of Baghdad were unrivaled. The House of Wisdom, established soon after the city was built, was a magnet for the most intelligent scientists, thinkers, mathematicians, and linguists of the world. The caliphs were patrons of literature, science, and the arts.
Although by the mid-1200s much of the glamour and importance of Baghdad was gone. The caliphs were figureheads more interested in worldly pleasures than serving God through serving the people. The Abbasid army was effectively non-existent, and only served as bodyguards of the caliph. And the scientific achievements of the Muslim world were now centered in places such as Cairo, Muslim Spain, and India. 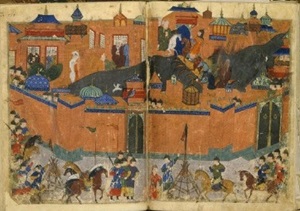 It was at this historic and landmark city that the Mongols arrived in 1258. Their army, estimated at over 150,000 soldiers, stood before the city that was just a shadow of the great capital of the Muslim world of the 800s. The siege began in mid-January and only lasted two weeks. On February 13th, 1258, the Mongols entered the city of the caliphs.

A full week of pillage and destruction commenced. The Mongols showed no discretion, destroying mosques, hospitals, libraries, and palaces. The books from Baghdad's libraries were thrown into the Tigris River in such quantities that the river ran black with the ink from the books. The world will never truly know the extent of what knowledge was lost forever when those books were thrown into the river or burned.

More important than the books, however, was the loss of life. It is estimated that between 200,000 and 1,000,000 people were butchered in that one week of destruction. Baghdad was left completely depopulated and uninhabitable. It would take centuries for Baghdad to regain any sort of prominence as an important city.

After Baghdad, the Mongols continued on westward. They conquered Syria from the Ayyubids, with help from the Armenians and neutrality from the Crusaders. In Palestine they reached the extent of their conquests. The new Mamluk Sultanate of Egypt, under the leadership of Baibars defeated the Mongols at the Battle of Ain Jalut in 1260.
This prevented a Mongol invasion of the Holy Lands of Makkah, Madinah, and Jerusalem. This also ensured the safety of the only remaining powerful Muslim empire of the time, the Mamluks.

Despite ultimately being unsuccessful in their attempt to destroy Islam, the Mongols left a deep political, economic, and military scar in the heart of the Muslim world. Entire regions were depopulated. Irrigation canals, fields of crops, and economic infrastructure were destroyed beyond repair. The political institutions, such as the caliphate, that held the Muslim world together for centuries were simply abolished. 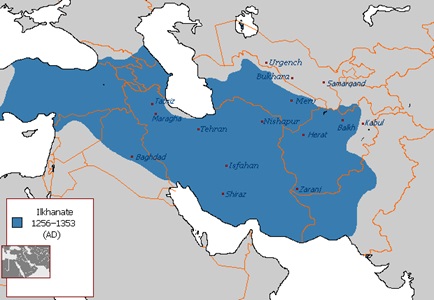 The Mongol Il-Khanate established by Hulagu's descendants would rule over Persia, Iraq, and Anatolia for over 100 years. Over decades and centuries, the Mongols in Southwest Asia slowly converted to Islam and became absorbed in a Persian/Turkish culture. But there is no denying the immense negative effect the Mongols had on the Muslim world in the 1200s.

The Mongol invasion is one of the most demoralizing times of Islamic history. The death and destruction of the 1200s has not yet been seen again in the Muslim world. While most articles on this website illustrate the great achievements of Islamic history, it is similarly important to be aware of the negatives, particularly what causes them to occur. The Muslim world was largely unable to repel the Mongol invasion due to disunity and weak political and military institutions. Throughout Islamic history, disunity has always led to invasion and defeat, while unity has led to great Islamic empires that benefited the entire world.