1031-The Caliphate of Cordoba Falls

Disunity in al-Andalus: The Taifa Period

One of the recurring themes of Islamic history is that disunity in the Muslim world has consistently led to weakness and the decline of one-powerful empires. One of the most clear examples of this was the taifa period of al-Andalus – Muslim Spain – in the 11th century. In the 700s, al-Andalus was established as a powerful and prosperous province under the Umayyads. After the Abbasid revolution of 750, al-Andalus became an autonomous state under the sovereignty of what remained of the Umayyad dynasty.

Al-Andalus reached its peak around the year 1000. The Umayyad Caliphate of Cordoba was the most powerful state in Western Europe politically as well as economically. The artistic, academic, and social achievements of al-Andalus rivaled that of any other part of the Muslim world at that time, including the advanced civilizations in Iraq, Egypt, and Persia. However, within 50 years, all that would change. Al-Andalus would go from being one powerful united state, to one that is divided, vulnerable to invasion, and politically dependent on outsiders. This time, known as the Taifa Period, sowed the seeds for the decline of al-Andalus and its eventual fall in 1492.

Emergence of the Taifas
In 976, a 10 year old child came to the throne as the caliph of the Umayyad Caliphate in al-Andalus. Since he was a young boy who was clearly not ready to lead, real power went to al-Mansur ibn Abi 'Amir, an advisor to the Umayyad court. During al-Mansur's three decades as the effective ruler of al-Andalus, Muslim power reached its maximum point in the Iberian Peninsula. However, a consequence of al-Mansur's monopoly on power was the decline of the importance of the caliph himself. After the death of al-Mansur in 1002, al-Andalus was rocked by disunity, as the caliphs were unable to exert authority and individual rulers rose to create independent states – known as taifas – throughout the peninsula. This was the beginning of the Taifa Period. 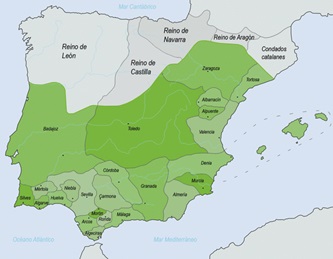 The taifa states of al-Andalus in 1031 after the fall of the Caliphate of Cordoba.

The best explanation of the rise of the taifas was given by Abdallah ibn Buluggin, a contemporary who saw the rise of the taifas first hand:
"When the 'Amirid dynasty [of al-Mansur] came to an end and the people were left without an imam [leader], every military commander rose up in his own town and entrenched himself behind the walls of his own fortress, having first secured his own position, created his own army and amassed his own resources. These persons vied with one another for worldly power, and each sought to subdue the other."1

These taifa kings were not from the Umayyad family, nor did they have any traditional claims to authority, so their ability to exert authority was limited to their ability to militarily conquer lands. With dozens of commanders rising up in the mid-11th century, conflict was bound to happen.

Taifas generally centered around the major cities of al-Andalus, such as Toledo, Granada, Seville, and Cordoba, and the taifa kings used the populace they ruled over to build armies and go to war with other taifas. This infighting among Muslim kings would have disastrous results for Islam in Spain.

Character of the Taifas

The leaders of the taifas were as diverse as the society of al-Andalus itself. In the southern parts of the Iberian Peninsula, taifa kings came from wealthy Arab families who had a leading role in the now-extinct caliphate. Seville, Zaragoza, and Cordoba were ruled by such leaders. Further north, Berbers had traditionally settled since the 700s since the landscape in central Iberia was similar to their homeland in North Africa. Thus, the taifa kings there tended to be of Berber origin.

Interestingly, however, the infighting among the Muslim taifa kings was not based on ethnic divisions. Instead, fighting was based on the individual desire for power among the taifa kings to increase their own power. Using forces that were loyal to them, these kings would raid nearby lands, conquering neighboring towns and cities from other taifa kings. As a result of this consistent raiding, from the emergence of the taifas in the early 1000s to 1080, the number of taifa kingdoms declined from 30 down to 9 as the more powerful taifas conquered the weaker ones.

The Christian Advance
The only groups that really benefited from the Taifa Period were the Christian kingdoms of the north. As the Muslim states continued to fight against each other, Christian states took advantage of the situation to push south and conquer Muslim territory. In many cases, however, the taifa kings actually invited Christian kings to fight on their behalf against other Muslim states, and that is what truly caused the loss of Muslim territory in the 11th century.
The first taifa to request the help of Christians in inter-Islamic warfare was Cordoba, the old capital of the Umayyad Caliphate. After the fall of the caliphate in the early part of the 11th century, conflict broke out inside the city between the citizens of Cordoba and Berber warriors who had recently immigrated from North Africa. Between 1010 and 1013, both sides employed Christian mercenaries (paid warriors) to advance their military goals in the city. For the first time in hundreds of years, non-Muslim soldiers with drawn arms paraded through the streets of Cordoba, once the capital of Muslim Spain.

After the precedent was set by the conflict in Cordoba, the Muslim taifas were quick to employ Christians within their own armies, or to outright request that Christian kings from the north fight against other Muslims on their behalf. In 1043, the kings of the Toledo taifa called upon the Christian kingdom of Navarre to fight against the Guadalajara taifa. In return, King Garcia Sanchez of Navarre received gifts, supplies, and reaped the crops of the Toledo countryside while terrorizing Muslim villages in the region. In retaliation, the taifa of Guadalajara sought the help of Fernando I of Leon-Castille, who also received a huge amount of wealth in return for fighting against a rival Muslim taifa.

Dozens of examples of such situations exist. More important than listing each and everyone one of them is understanding what impact this form of conflict had on the Muslims in al-Andalus. The most apparent result of the use of Christian armies was the advance of Christian states southward. As Christian monarchs moved south to fight against the taifas, they conquered land and added it to their domains. This was considerably easier during the Taifa Period than before because the Muslim states were preoccupied in war against each other.As a result, cities and towns that were once under Muslim authority found themselves under the control of the growing Christian kingdoms. Needless to say, Muslims in these areas began to be marginalized in an attempt to eventually ethnically cleanse the land and make it entirely Christian.

Another consequence of these wars was economic. In exchange for fighting for the taifa kings, Christian monarchs demanded enormous sums of money, wealth, and supplies. This led to obvious economic decline, as tax revenues were increasingly sucked out of the taifas, leaving less money available for economic investment. In a spiraling situation, taifa kings would spend so much money on Christian armies that they could no longer afford to defend themselves on their own, causing them to again ask Christian monarchs to support them, in exchange for more money.

The End of the Taifa Period
Had the taifas been allowed to continue this disastrous cycle, al-Andalus could very well have been entirely conquered by the Christian states in the 11th and 12th centuries. This was not the case, however. While the taifa wars were raging in the Iberian Peninsula, a new movement was taking shape in North Africa.

The Murabitun Empire in 1120

In 1040, Abdullah ibn Yasin, a Berber scholar in North Africa, established a movement known as the Murabitun (Almoravids in English). The purpose of the movement was to take a strict approach to Islam and abolish all un-Islamic practices and laws. Their motto was "encouraging good, forbidding evil, and abolishing un-Islamic taxes". Due to the intense military tradition of the North African Berbers, the taifa kings at times relied on the Murabitun to come to al-Andalus to resist the Christian advance, such as in 1091 when the taifa of Seville was in danger of falling to Alfonso VI of Castille, who had already captured the great Muslim city of Toledo. It took such dire circumstances for the taifa kings to call upon Yusuf ibn Tashfin, the leader of the Murabitun in the late 11th century, to come and fight for the independence of Muslim Spain.

Keeping in mind the dirty nature of al-Andalus' politics during the taifa period, ibn Tashfin vowed to only defeat Alfonso VI and then return to Africa, which he did. However, after being called over to al-Andalus on numerous occasions to defend against Christian attack, ibn Tashfin was urged by Muslim scholars, including Imam al-Ghazali, to overthrow the ineffective taifa kings and simply add al-Andalus to the Murabitun realm. He did just that in the 1090s, taking the taifa kingdoms one at a time, and keeping them united in the face of Christian advances. Although the Murabitun were never able to regain any land that was lost during the taifa period, they were able to slow the advance of Christian armies south, which would take 400 more years to fully defeat the Muslims of al-Andalus.