800s-Ziryab became a cultural Icon in the Iberian Peninsula

Culture is often a difficult topic to study historically. How did present-day cultures develop? What other regions and times have affected our modern-day cultures? How were ancient cultures different from our own? One of the best ways to address such questions is to look at some of the cultural giants of the past. One of these giants was a Muslim man who lived in al-Andalus (Muslim Spain) in the 800s. He was affectionately known as Ziryab and he revolutionized everything from fashion, to dining, to music, to hairstyles, to hygiene. He was one of the greatest cultural icons of the Middle Ages and the impact he had is still felt in the world today.

Music and Origins
Ziryab's birth name was Abu al-Hassan. He was born in 789, but his place of birth is debated. Historians throughout the ages have claimed him to be Arab, Persian, Kurdish, and Black African. No doubt this confusion exists as each group wants to claim him as their own. His nickname of Ziryab means "Blackbird" in Arabic. He got this nickname because of his dark skin and beautiful singing voice.

He was originally a court entertainer during the reign of Harun al-Rashid, the Abbasid caliph in Baghdad. The story has it that he was such a good musician that others in the royal court were jealous of him enough to exile him, lest they lose their jobs to his immense talent. Once exiled, he sought refuge in Africa, offering his skills to whatever local ruler was willing to patronize him. He got his big break, however, when he was invited to the Umayyad emirate of Spain, by the Umayyad emir al-Hakam. 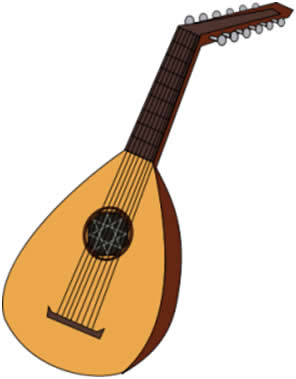 When Ziryab finally made it to al-Andalus, he was welcomed by al-Hakam's successor, Abd al-Rahman II. Abd al-Rahman was fascinated by Ziryab's talents and immediately made him a major part of the royal court in Cordoba. Ziryab was given a hefty salary, a palace to live in, and major control over the cultural development of al-Andalus.

He established an institute to educate people in musical arts and entertainment. At the institute, he took wealthy and poor students alike. He taught the traditional musical styles and songs of his old home, Baghdad, but also added his own twist to many songs, innovating as he went along. He even added a fifth string to the traditional instrument, the lute. This later paved the way for the development of the guitar. He was respected by all in al-Andalus at the time as the foremost musician of the day.

Fashion and Food
Like today's superstar musicians, Ziryab was also a fashion and cultural icon. People looked to him for the latest and greatest forms of dress, hairstyles, and culinary trends. Ziryab never disappointed.

Up until his arrival, al-Andalus was a quite rough and tumble land. Not much emphasis was put on fashionable clothing, or other ways of looking stylish. Ziryab changed all that. He dictated that certain colors of clothing should be reserved for certain times of the year. Winter clothes should be of darker color and heavier material, with furs being an important part of outfits. Fall and Spring clothing was supposed to reflect the dominant colors of the seasons. In Fall one should wear reds, yellows, and oranges, reflecting the changing colors of the leaves. In Spring, he believed brighter colors reminiscent of the blooming flowers should be worn. In the Summer, whites and other light colors should be worn. This was the origin of the modern rule of "no white clothes after Labor Day (early September)".

Asparagus was first used as a food by Ziryab

He also changed the way food was eaten in al-Andalus. Before him, no one in al-Andalus (or elsewhere in the Muslim world) cared much for food being served in courses. Different flavors and types of food from sweets to meats to salads were all served together. Ziryab dictated that there should be an order to how food is eaten. Soup was served first as an appetizer. This was then followed by the main course, which would include meats, fish, and other heavier plates. Finally, the meal was finished off by fruits and other sweets, with nuts being served afterwards as a snack. This revolutionized how chefs prepared food and how people ate. Modern multi-course meals also follow this same process today, over 1000 years after Ziryab initiated it.

Ziryab also innovated in many other aspects of dining. He was the first to recognize asparagus as an edible and tasty vegetable. He got rid of the clunky old metal goblets people had been using since before Islamic times and replaced them with lighter, more attractive crystal and glass cups, another innovation that still exists today.
Hygiene

Not being a man of only a few tricks, Ziryab changed the way Andalusians looked at hygiene. He was the first to introduce toothpaste to the peninsula (no doubt to the pleasure of everyone that had to talk to anyone else from close range). He was the first to suggest deodorant as a way of smelling nice, even in the hot Andalusian summers. He brought new hairstyles as well. Before his time, the people of al-Andalus (both men and women) generally had long and disheveled hair. Ziryab made popular hairstyles that kept men's hair a little shorter and cleaner, and suggested bangs for women. These new hairstyles were managed with a new form of shampoo that Ziryab initiated that was made with rosewater and salt, leaving hair healthier than before.

As a cultural icon, his self-imposed rules about fashion, hygiene, and food quickly spread throughout the Iberian Peninsula and beyond. Throughout Medieval Europe and the Muslim world, his styles were imitated and added to existing cultures. His innovations remain today in the way we eat, dress, and take care of ourselves. He was truly a cultural icon whose styles lasted well beyond his lifetime.