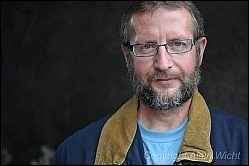 Swiss Politician Bans Minarets then Converts to Islam
The Swiss politician Daniel Streich, who rose to fame as a result of his opposition to mosques in his homeland, has now embraced the faith he reviled.
Daniel Streich was a member of the Swiss People's Party (SVP) in Switzerland. A well-known politician, Streich led the calls for a ban on minarets across Switzerland. He was active in building anti-Muslim sentiments throughout Switzerland. This sustained campaign led to him being given a high ranking position in the Swiss Army.

"As a revert to Islam, each day is a challenge to me, but I know that Allah is my guide. As a new Muslim, I am, of course, not going to be perfect, and even when I end this life I will not be perfect. But I always remember Allah, and I no longer feel alone! Allah did not promise us that life would be perfect, but I know that He will not give me any burden that is more than I can stand, and that He would never leave me."

"I Swear, that this Koran, from which the modern science lags behind on 1400 years, can not be speech of the person. It is true speech of Almighty."

In France, Islam is very quickly spreading among people, who have become famous in the most different fields of knowledge and activity. Today, the number of people, who left Christianity and accepted Islam, has reached already hundred thousand. Archbishop Parisian - supreme ecclesiastic of the French Catholic church, officially confirms these figures. Among those, who preferred Islam, - not only are natives of working class and civil servants, among them are also some certainly outstanding people.

This American lady, a former radical feminist and Southern Baptist from Oklahoma, studied the Quran, Sahih Muslim and fifteen other books on Islam in an attempt to convert the Arabs in her college class to Christianity and "save those poor ignorant heathens from the fires of hell."  But guess what happened!