"I began to see Islam with its own eyes, as the unadulterated, pristine belief in the one and only, the true God, Who does not beget, and was not begotten, Whom nothing and nobody resembles... In place of the qualified deism of a tribal God and the constructions of a divine Trinity, the Qur'an showed me the most lucid, most straightforward, the most abstract - thus historically most advanced – and least anthropomorphic concept of God. The Qur'an's ontological statements, as well as its ethical teachings, impressed me as profoundly plausible, "as good as gold," so there was no room for even the slightest doubt about the authenticity of Muhammad's prophetic mission. People who understand human nature cannot fail to appreciate the infinite wisdom of the "Dos and Don'ts" handed down from God to man in the form of the Qur'an."

Abdur Raheem Green describes in this video his father's last days in hospital before he passed away.

Mr. Green was the ex-Director of Cairo Barclays Bank, and his son Abdur Raheem found Islam over 20 years ago, and is today a well-known figure among Muslim scholars and preachers in the UK.

He thought that his father would never become Muslim, but Mr. Green eventually converted to Islam only ten days before he died.

Muhammad Marmaduke Pickthall (1875-1936) was an English traveler, novelist, polemicist, and educationist. He studied Islam and Qur-an and finally accepted Islam in 1919 AD. His father Rev. C. G. Pickthall was rector of Chelmsford and his mother Mary was daughter of Admiral D. H. Ovrian. He mastered French, German, Italian and Spanish while studying at various places in Europe. His travels throughout the Muslim world formed the basis of several of his novels set in the Middle East and allowed him to become fluent in Arabic, Turkish, and Urdu. After his conversion, he served as the acting Imam of the London Mosque (Notting Hill). 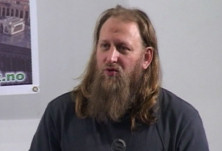 Let me introduce myself and my background.
I was born in Tanzania in Dar es Salaam.
My father at the time was a colonial administrator in the now defunct British empire.
An empire that stretched once upon a time not that long ago over one third of the earth’s surface.
Now the only thing left is some islands in the Falklands and that’s all that’s left there. How things changed!
How the mighty have fallen!
This is a lesson that Allah the Almighty tells us in the Quran to travel the earth and see the consequence. See what happened to people who came before you, who were mightier in power and strength and see what’s left of them.
So anyway back to my father, a colonial administrator in Tanzania where I was born, and my parents named me Anthony Vatswaf Galvin Green. OK, I thought you were going to laugh! Vatswaf is a Polish name because my mother in fact is Polish.

A relatively small, but growing trend in Europe involves Christian converting to Islam. Despite the heated "clash of civilizations" rhetoric that 9/11 has provoked, many people are stepping across the Christian-Muslim divide. Peter Ford wrote in the Christian Science Monitor that "[a]lthough there are no precise figures, observers who monitor Europe’s Muslim population estimate that several thousand men and women convert each year."

In recent years, several I the ranks of these converts to Islam have come from the world of soccer. Most have come from France, the country with the largest Muslim population in Europe.