Jesus Guided me to Islam: ADEBAYOR

ABUJA – Almost a month after announcing his reversion to Islam, Tottenham striker Emmanuel Adebayor revealed reasons behind his conversion, saying that similarities between the two faiths led him to the truth.

“Jesus (pbuh) taught that there is only One God and Only God should be worshipped as taught in Deut 6:4, Mark 12:29. Muslims also believe this as taught in the Qur’an verse 4:171,” Adebayor was quoted by The Herald.

Adebayor was talking about one of 13 reasons behind his decision to embrace Islam after being seen taking Shahada, or declaration of faith, in a YouTube video posted online last month.

Clothed in a white robe, Adebayor in declaration of his new faith said; “Wa ash-hadu anna Muhammadan rasulullah” (..and I bear witness that Muhammad is the messenger of Allah).

Among the reasons behind his reversion to Islam was that prophet Jesus (pbuh) didn’t eat pork likeMuslims who consider pigs and their meat filthy and unhealthy to eat.

Words like “As Salaamu Alaikum” (Peace be with you) and “God Willing” (InshaAllah), mentioned by the Qur`an, the holy book of Islam, had been always used by Jesus (pbuh), the Togolese footballer found.

“Jesus (pbuh) washed his face, hands, and feet before praying. The Muslims do the same. Jesus (pbuh) and other prophets of the Bible prayed with their head to the ground (see Matthew 26:39). Muslims do too as taught in the Qur’an verse 3:43,” Adebayor stressed.

“Jesus (pbuh) had a beard and wore a robe. It is Sunnah for Muslim men to do the same.

Adebayor previously played for Metz, Monaco, Arsenal, Real Madrid and Manchester City. He was voted African Footballer of the Year in 2008.

Described as being "tall, skilful, strong in the air and with the ability to score and create," he represented the Togo national football team at the 2006 FIFA World Cup in Germany, the country's début, and to date only, appearance at the World Cup.

He is currently Togo's all-time top goalscorer with 28 goals. 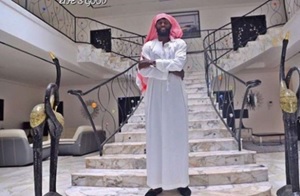 Citing the modesty of Jesus’ mother Virgin Mary (may Allah be pleased with her), who used to dress modestly by fully covering her body and wearing a headscarf, Adebayor said that Muslim women are required todress modestly and wear hijab too, which is seen by Islam as an obligatory dress code.

The tenth reason mentioned by Adebayor was the religious obligation of fasting which is common between Islam & Christianity.

“Jesus (pbuh) and other prophets of the Bible fasted up to 40 days (see Exodus 34:28, Daniel 10:2-6. 1Kings 19:8, and Matthew 4:1-Muslims do so also during the month of Ramadan. Muslims are required to fast the full obligatory 30 days (see Qur’an 2:183), and others take it a step further by fasting an additional 6 days to increase their rewards,” he said.

Revealing more reasons to join Islam, Adebayor said: “Jesus (pbuh) taught to say “Peace to this house” when entering it (see Luke 10:5), and to also greet the people in the house with “peace be unto you”. Muslims do exactly what Jesus did and taught. When we enter our homes and the homes of others we say “Bismillah” and also greet with “as salaamu alaikum” (peace be upon you) as taught in the Qur’an verse 24:61.”

He went on saying: “Jesus (pbuh) was circumcised. Circumcision is 1 of the 5 fitrah in Islam, so Muslim men are required to be circumcised too.

“Jesus (pbuh) spoke Aramaic and called God ”Elah”, which is pronounced the same as “Allah”. Aramaic is an ancient, Biblical language. It is one of the Semitic languages that also include Hebrew, Arabic, Ethiopic and the ancient Assyrian and Babylonian language of Akkadian.”

The 31-year-old Adebayor is stated in many publications as being very religious. The former Arsenal, Man City and Real Madrid forward was a practicing Christian until recently.