One of the most jarring and important events of recent Islamic history has been the Arab-Israeli Conflict. This conflict is multifaceted, complex, and is still one of the world’s most problematic issues in international relations. One aspect of this conflict is the refugee problem that began in 1948, with the creation of the State of Israel. Over 700,000 Palestinians became refugees that year, in what is known as the “Nakba”, which is Arabic for catastrophe.

In the 1800s, a new nationalistic movement was born in Europe. Zionism was a political movement advocating the creation of a Jewish state. Many Jews believed having their own state was necessary in the face of discrimination and oppression by Europeans. After debating where to create this new state should exist at the First Zionist Congress in 1897, the Zionist movement decided to aim at creating their state in Palestine, which was then part of the Ottoman Empire. The sultan/caliph of the Ottoman Empire, Abdülhamid II, refused to accept this, even in the face of a 150 million British pound payment proposed by Theodor Herzl, the founder of the Zionist movement, in exchange for ownership of Palestine.

The door would open for Zionism  however, after the First World War. During the war, Britain captured Palestine from the Ottomans in 1917. At around the same time, the British foreign secretary, Arthur Balfour, issued a declaration to the Zionist movement promising British support for the creation of a Jewish state in Palestine.

After the war, Palestine became a League of Nations mandate under British control in 1920. Since it was under British control, the Zionist movement heavily advocated the emigration of European Jews to Palestine. The result was an exponential rise in the number of Jews living in Palestine. According to British census data, in 1922, there were 83,790 Jews in Palestine. By 1931, it was 175,138. And by 1945, the number had jumped to 553,600 people. In 25 years, Jews had gone from 11% of the total population to 31%.1

Naturally, the reaction from the Palestinian Arabs was less than enthusiastic. Tension between new Jewish settlers and native Palestinians erupted on numerous occasions.  Eventually, the British decided by the 1940s that they could no longer control the territory, and decided to end the mandate of Palestine and leave the country. 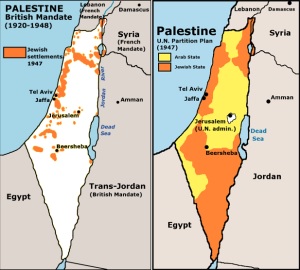 The left map shows the Jewish-majority areas in the Mandate of Palestine. The right map illustrates the UN Partition Plan.

Seeing the coming end of British control over Palestine, and the inevitably conflict between the Arabs and the Jews, the newly-created United Nations took up the issue in 1947. It came up with a plan known as the United Nations Partition Plan for Palestine. The plan advocated the creation of two states in what has historically been known as Palestine. One for Jews, known as Israel, and one for Arabs, Palestine.2

While the Jews in Palestine accepted the plan with enthusiasm, the Arabs vehemently rejected it. In their view, it took away land that had been a historically Muslim Arab land since the Crusades and gave it to the new Jewish minority in the country. Tensions rose again between the two sides.

In the midst of this rising tension, Britain declared an end to the Mandate of Palestine, and withdrew from the country on May 14th, 1948. That day, the Zionist movement in Palestine declared the establishment of a new country, Israel. The following day, the neighboring Arab countries declared their rejection of the declaration and invaded Israel.

Without going into the details of the war itself, the result of the 1948 war was an enormous increase in the size of Israel. The resulting state was much larger than the state proposed by the United Nations, capturing approximately 50% of the proposed Arab state.

Expulsion of the Palestinians 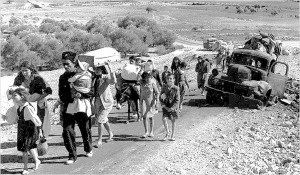 Refugees are always an unfortunate side-effect of war. Throughout history, groups of people had fled to escape fighting and conquest. What makes the Palestinian refugees of 1948 unique, however, is whythey became refugees. Since this is still very much a real conflict today, historians analyzing the causes of the Palestinian exodus are heavily influenced by politics and international relations. Historians (including Israeli historians) have however defined a few key reasons for the exodus:

Fear: Many Palestinians left because due to fear of Israeli attacks and atrocities. These fears were not unwarranted. On April 9th, 1948, about 120 Israeli fighters entered the Palestinian town of Deir Yassin, near Jerusalem. 600 villagers were killed.4 Some died defending the city in battle against Israeli forces, while others were killed by hand grenades thrown into their homes, or executed after being paraded through the streets of Jerusalem.

Naturally, once word of this massacre spread throughout Palestine, Palestinians feared the worst from the Israelis. In many cases, entire Palestinian villages fled Israeli advances, hoping to avoid the same fate as Deir Yassin. Some Israeli groups, such as Yishuv, accelerated this feeling through psychological warfare intended to intimidate Palestinian towns into surrendering or fleeing. Radio broadcasts were aired in Arabic, warning Arab villagers that they could not stand up to Israeli advances, and resistance was futile.

Expulsion by Israeli Forces: Fear was the main motivating factor for refugees early in the war. As the war dragged on through 1948, however, deliberate Israeli expulsion became more popular. As the Israelis conquered more and more territory, their forces became more thinly spread throughout the country. As a result, many newly-conquered villages were forcibly emptied by Israeli forces.

Notable examples of this were the cities of Lydda and Ramla, near Jerusalem. When they were conquered in July of 1948, Yitzhak Rabin signed an order expelling all Palestinians from the two towns, amounting to between 50,000 and 70,000 people.5 Israeli forces bused some of them to the Arab front lines, while others were forced to walk, only being allowed to take with them whatever they could carry. This expulsion alone accounted for about 10% of the total Palestinian expulsion in 1948.

Encouragement by Arab Forces: In some cases, the Arab armies from neighboring countries, particularly Jordan, encouraged Palestinian towns to evacuate. One possible reason for this was that to provide an open battlefield without civilians in the crossfire. In any case, many Palestinian civilians left their homes under direction from Arab armies, hoping to return soon after the inevitable Arab victory, only to become refugees in neighboring countries. 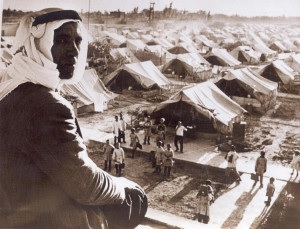 A Palestinian refugee camp near Damascus, Syria in 1948.

The 1948 Arab-Israeli War created a massive refugee problem in the Middle East. Over 500 towns and cities throughout Palestine were completely depopulated during this time. The 700,000+ refugees from these towns became an economic and social burden on neighboring countries and the West Bank, Palestinian land under Jordanian authority. In 1954, Israel passed the Prevention of Infiltration Law. It allowed the Israeli government to expel any Palestinians who managed to sneak back to their homes in what was now Israel. It also allowed the government to expel any internally displaced Palestinians still within Israel if they sought to return to their homes.

Today, the right of return is still a major problem that has yet to be solved by peace negotiations between Palestinians and Israelis. The forcible expulsion of Palestinians in 1948 proved to be a problem that continues to last even after the lives of the original refugees draw to a close in the early 2000s.