The land of Iraq is home to some of the most ancient and precious civilizations in history. In the Mesopotamian valley that encompasses the Tigris and Euphrates Rivers, Babylonia, the world’s first empire was born. Writing was first developed along the banks of the rivers with tablets made of clay. Advanced government bureaucracies were first implemented here. It is truly one of the cradles of human civilization.

And when Islam was revealed in the deserts of Arabia south of Mesopotamia, the people of Iraq were some of the first to accept Islam outside of the Arabian Peninsula during the caliphate of Abu Bakr. As Islamic history went on, Iraq became one of the centers of the Muslim world, with Baghdad being established in the 8th century as the capital of the Abbasid Caliphate. Politics, culture, science, and religion all flourished here in early Islamic history. After the Mongol invasion, however, Iraq’s importance declined, it eventually became a part of the Ottoman Empire from the early 1500s until the end of the empire in the First World War. After the war, it was organized into a British-controlled mandate, which sought to create an independent nation-state in this ancient land.

Which brings us to the question: what is Iraq? The British assumed they’d find a homogeneous people in this land that would easily coalesce into one united nation, but the reality has been much more complicated. When the British drew Iraq’s borders, the people within those false borders were of different ethnic groups, religious beliefs, and languages, yet they were all expected to adopt a new identity – Iraqi – and function as a modern nationalistic European nation. This article will address the origins of these problems of identity in 20th century Iraq.

After the defeat of the Ottoman Empire in the First World War, the British and French found themselves in control of entire Fertile Crescent area: the modern nations of Iraq, Kuwait, Syria, Lebanon, Jordan, and Palestine. In accordance with the secret Sykes-Picot Agreement they signed with the French, the British agreed to divide the land between themselves and the French, with arbitrarily drawn lines as the borders. In the eastern part of this region, what was to become the nation of Iraq was within the sphere of the British, who sought to implement a mandate, as they did with Palestine and Jordan. The purpose of a mandate was to create a puppet government in local areas for the British to further extend their imperialistic goals. 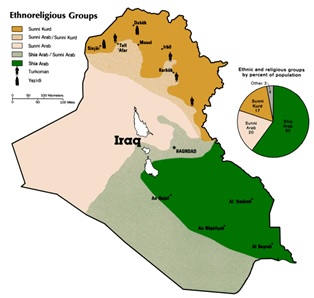 Ethnic and religious groups in Iraq

As with the other mandates that the British created, the borders of this new country were arbitrary. In the Ottoman period, the land between the Tigris and the Euphrates was organized into three different provinces, centered around the cities of Mosul, Baghdad, and Basra. “Iraq” as a political entity did not exist in the Ottoman period, or in any time prior to that. In fact, historically, the term “Iraq” has only referred to the southern portion of what is now considered Iraq, while the northern portion was known as “al-Jazira”.

Since the Ottoman Empire was a multi-ethnic state by nature, there was no demand for all Ottoman citizens to assume one identity. Kurds, Arabs, Turks, Armenians, and others were all expected to keep their own personal identities so long as they were loyal to the Ottoman government. Thus the people of what became Iraq had no concept of Iraqi identity as a unifying factor among themselves. When the British created modern Iraq, the expectations of a unified Iraqi identity would create massive social divisions within the new country based on its different ethnic and religious groups.

In the northern part of the mandate, the population consisted mainly of Kurds, a Sunni Muslim ethnic group with a language and culture separate from the Arabs. The Kurds made up about 15-20% of the total population of Iraq, but demanded a Kurdish nation -Kurdistan – that would bring together the Kurdish minority populations in Iraq, Syria, Turkey, and Iran.

In the central part of Iraq resided a Sunni Arab population, based around the city of Baghdad. They made up about 25% of the population. Despite this, they would be given some of the top government roles by their British overseers.

In the southern part of Iraq were the Shi’a Arabs. They made up an absolute majority of Iraq’s population – over 50%. Socially, they were very different from the Sunni Arabs to their north. The Shi’a ‘ulama (religious scholars) played a major role in the day-to-day lives of Iraq’s Shi’a population. Thus, the ‘ulama were capable of wielding a united Shi’a front while the rest of Iraq remained divided along ethnic lines.

Although the British were mostly unaware of the differences in Iraqi society, the people they put in charge of Iraqi government were more informed. After massive riots against the proposed mandate, the British declared Iraq a kingdom, and elected Faisal I as its king. He was a Sunni Arab from Hejaz, who had revolted against the Ottoman Empire on the side of the British in World War One. After a failed bid to become king of Syria, he migrated to Iraq where he became king with little to no local input.

Although Faisal was officially the sovereign king of Iraq, the British served as “advisors” to his rule. For all practical purposes, although Iraq was not officially a mandate, it was clearly not fully independent. The British played a major role in the domestic and foreign affairs of the Iraqi kingdom, a fact that was deeply resented by the Iraqi population. 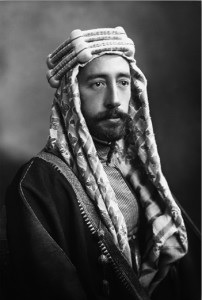 King Faisal I of Iraq

Hoping to bridge the gap between Sunnis and Shi’a, Faisal attempted to unify Iraq along Arab lines. Secular ideologies were fed into the educational system, where it was hoped that the next generation would identify themselves as Iraqi Arabs first, leading to a united nation. Until that next generation could mature in its secular Arab ideology, Faisal had to rely on the military to maintain order. His mainly Sunni Arab officer corps used the armed forces to suppress revolts by Shi’a and Sunni tribal leaders in the 1920s and 1930s.

Needless to say, this secular Arab focus alienated non-Arab populations of Iraq, specifically the Kurds in the North. Their demands for autonomy were largely ignored by the Iraqi government, since Kurdish nationalism did not easily fit in with the pan-Arab nationalistic ideology they were supporting. Other groups that were alienated by this policy were Iraq’s Assyrian Christian minority and Iraqi Jews.

The dominance of the Sunni Arab minority continued throughout the monarchy period of Iraq. In 1958, the monarchy was overthrown and Iraq entered a volatile period of instability for 10 years, which only ended with the rise of the Ba’athists in 1968. Despite promoting secularism and Arab nationalism, the Ba’athists, under Saddam Hussein, continued to concentrate power in the hands of the Sunni Arab elites in Baghdad. The alienation of the Kurds and Arab Shi’as continued to drive a wedge in Iraqi society that directly led to the sectarian violence in Iraq in the early 2000s, after the American invasion of 2003.

As Iraq attempts to rebuild and restore itself in the 21st century, the Iraqi identity remains an unsolved issue. The borders artificially drawn by the British in the 1920s have led to a society divided into three separate segments. Like many other Muslim nations whose borders were defined by Europeans in the early 20th century, unity among the populace remains an elusive goal. The British disregard for the ethnic and religious identities of the Iraqi people has led to a situation where Iraq, with its three separate peoples, is unable to find social cohesion in the era of modern nation-states.