Culture began with the "prologue in heaven." With its religion, art, ethics, and philosophy, it will always be dealing with man's relation to that heaven from whence he came. Everything within culture means a confirmation or a rejection, a doubt or a reminiscence of the heavenly origin of man. Culture is characterized by this enigma and goes on through all time with the steady striving to solve it.

"Let there arise out of you a band of people inviting all to what is good, enjoining what is right, and forbidding what is wrong. Such are the ones who shall prosper."

This is the commandment to the Muslim community to establish a system that is essentially based on holding fast to Allah's rope or covenant and is a necessary prerequisite to help people to abide by its demands. For this purpose, the Muslims are instructed to appoint a group from among them to enjoin maruf or good, or the noble conventions of society, and to forbid munkar or evil as defined by the Islamic Shariah. The way the imperatives — enjoining and forbidding — are used concerning good and evil clearly indicates that this task is to be carried out not by mere verbal advice and admonition, but must also be enforced by law and authority. This is impossible without political power vested in such a group. If the purpose were to accomplish the task of enjoining good and forbidding evil by advice and propagation of dawah only, the words yaduna ila-l khayr (inviting to good) should have sufficed and there was no need to add ya muruna bi-l maruf (enjoining or commanding what is right).

This email address is being protected from spambots. You need JavaScript enabled to view it.

The economic health and survival of Mauritius are intricately linked with maritime security in the Indian Ocean. Mauritius, which nourishes the ambition of becoming a regional maritime hub, critically needs an ocean free of conflicts and piracy.

For millennia the peoples living around the Indian Ocean have benefited from its rich trade, while the interaction resulting from these maritime exploits invariably influenced their lives fundamentally. These traditional patterns of trade and communication changed drastically when first the Portuguese and then other European powers began sailing around the Cape of Good Hope to establish trade links and empires in the East. The Indian Ocean became a platform for power rivalry and conflicts among European naval forces. However, during the course of the 19th century, European navies played an important role in maintaining good order at sea, eradicating piracy and countering slavery. 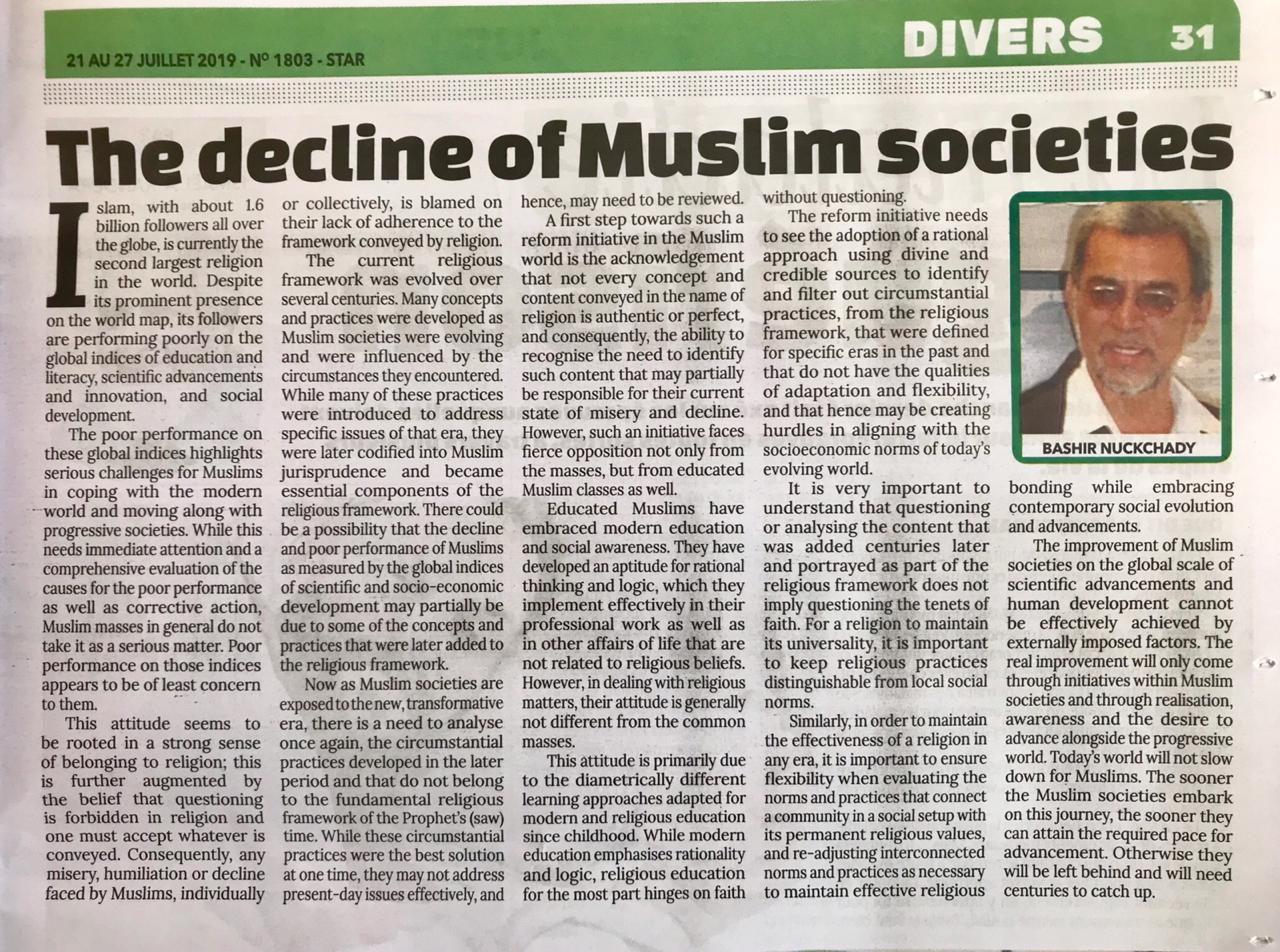 Many monotheists, including many Muslims, who themselves adhere to certain way of thinking and a certain pattern of behaviour, also believe that all good people have to fit in their frame. Tolerating differences in "others" has not become fundamental in our thinking nor in our faith, where dogma has overshadowed morality and behaviour. Diversity within unity has not yet been recognized as being essential among Muslims and among all human beings. Horrible crimes are committed in the name of religion all over the world: in Northern Ireland, in Bosnia, in Algeria, in the Indian subcontinent and Sri Lanka and elsewhere. "Ethnic-cleansing" has become a familiar term in the political glossary, and ethnic conflicts cover the whole world; the ethnic mass massacres in Africa, South of The Sahara are just one tragic example. Conflicts resulting from ethnic and religious differences, or born from chauvinistic nationalism and a fanatic following of ideologies, have been happening all through history, and Muslims and monotheists have not been an exception. Furthermore, modern technology and evil growth of terrorism and weapons of mass destruction have contributed to horrible practices aimed at destroying the "others," efforts that would bring with them a total self-destruction of the whole human race.

Click to view our timetable of activities for the year 2019

We would be happy to hear from you!